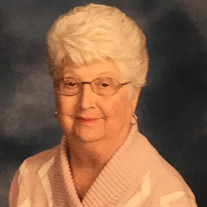 Alice Maresh, 85, of Dodge passed away on Thursday, June 6, 2019 at St. Francis Memorial Hospital in West Point. Memorials can be directed towards Family Wishes. Alice Wilhemenia Wiese was born October 12, 1933 to Henry and Rose (Boehr) Wiese. She was 10th of 11 children born in the Wiese family. She attended Holy Family grade school and high school in Lindsay, Nebraska. She worked at B-D of Columbus for 5 years then at Mutual of Omaha for 3 years and at Employers Mutual Casualty Co for 5 years before her marriage to Richard. Alice married Richard Maresh on May 22, 1965 at Holy Family Church in Lindsey, by Fr. Floyd Wesseling. They moved to the Maresh home place, 4 miles North of Dodge and farmed their entire lives. Alice, Richard, their 4 children and 6 grandchildren are all members of the First Catholic Slovak Ladies Life Insurance Co. Alice sold their insurance and was the secretary for Branch 8 with FCSLA of Dodge for over 40 years. She was also the secretary for the Sate of Nebraska for 20 years. Alice had been a delegate to a number of conventions and Chair-ed the Resolution Committee. In October of 2011 she was a delegate to the FCSLA 40th Convention in Baltimore, MD. They were members of St. Wenceslaus Catholic Church where Alice was in the Parish Council, and was a member of the Altar Society and Christian Mothers. In her spare time, she also volunteered at Parkview Home in Dodge, loved making quilts and baking her favorite kolaches and horn rolls. She is survived by her children: sons Kevin and Paul of Dodge, daughters Naomi (Terry) Thies of Sterling, NE, and Deb (Chris) Prantl of Colorado Springs, CO; grandchildren: Nathan (fiancé Erika Goracke) and Colby Thies, Katie, Ben, Jessie and Nick Prantl; brother Dave (Delores) Wiese of Lindsay; brother-in-law Louis Bohaboj of Dodge, and many nieces and nephews. Alice is preceded in death by her parents; husband Richard in 2014; her brothers: Ed, Bill, Ray, Harold, Len, and Rich Wiese; sisters Beda Behmer Sister Thelma Wiese and Eleanor Wiese; sisters-in-law Rita Spenner, Mary Ann Bohaboj, and Audrey Ptacek, and one granddaughter Emily Prantl.

The family of Alice W. Maresh created this Life Tributes page to make it easy to share your memories.

Send flowers to the Maresh family.