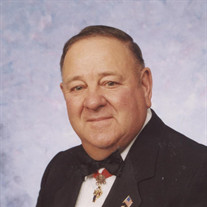 Mass of Christian Burial for Allen Kohlia, age 77 of Howells, will be held 10:30 AM on Wednesday, March 25, 2015 at St. John’s Catholic Church in Howells. Visitation will be held at the church on Tuesday from 2 PM to 7 PM and on Wednesday starting at 9:30 AM. Rosary will be recited on Tuesday at 3 PM and 7 PM (combined parish and Knights of Columbus). Burial will be in the St. John’s Catholic Cemetery. Allen was born August 23, 1937 in Columbus, NE to Otto and Lillian (Odvarka) Koliha. He attended Colfax County rural school district # 28 and graduated from Clarkson High School in 1954. On August 13, 1958 he and Marvine Belina were married at St. Henry’s Catholic Church northwest of Howells. Allen was a member of the Navy Reserve and farmed south of Howells until 1999 when they moved to Howells. Along with still being a part time farmer he was also a bus driver for the Howells schools until 2012. Allen was a member and leader of the Midland Feeders 4-H Club, president of the Pla-Co Pork Producers, served on the school boards of District # 17 and 1 R and was still an active member of the Colfax County Fair Board. Allen played accordion in the Joe Buresch Polka Band, the Clarkson Community Czech Band and the Polka Commotion. He was a member of the Knights of Columbus #5439, Past State Deputy and Past State Master of the Nebraska jurisdiction as well as being the present District Deputy #14. He was the founder of the K of C #5439 Pedal Pullers. He was also a member of The First Catholic Slovak Ladies Association. Allen died March 22nd at the Methodist Medical Center in Omaha four days after suffering a stroke at their home. Allen is survived by his wife, Marvine of Howells; son, Dan Koliha of Clarkson; daughter, Annette (Eddy J.) Sayers; seven grandchildren, Sarah Koliha, Bryan (Megan) Koliha, David Koliha, Eddy A. (Tami) Sayer, Chris Sayers, Katie (Pat) Baumert and Jessi Sayers; six great grandchildren, Noah Salinas, Izaak Koliha, Reagan Koliha, Della Koliha, Ava Koliha and Evan Koliha; sister, Mae (Victor) Vrba of Clarkson. He is preceded in death by his parents. Family suggest memorials to Family Choice.

Mass of Christian Burial for Allen Kohlia, age 77 of Howells, will be held 10:30 AM on Wednesday, March 25, 2015 at St. John&#8217;s Catholic Church in Howells. Visitation will be held at the church on Tuesday from 2 PM to 7 PM and on Wednesday... View Obituary & Service Information

The family of Allen Koliha created this Life Tributes page to make it easy to share your memories.

Mass of Christian Burial for Allen Kohlia, age 77 of Howells,...

Send flowers to the Koliha family.