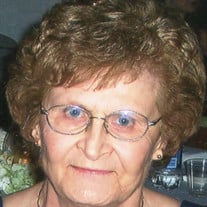 Alvina Dosta, 85, of Dodge died Friday, December 30, 2016 at Parkview Home in Dodge. Funeral service will be held at 10 A.M. Tuesday, January 3, 2017 at St. Wenceslaus Catholic Church in Dodge. Visitation will be held at the church on Monday from 5 PM to 7 PM and on Tuesday from 9 AM to 10 AM. Rosary will be recited at the church at 7 PM on Monday. Burial will be in the St. Wenceslaus Catholic Cemetery. Alvina Jean was born March 24, 1921 at Leigh to Robert L. and Freida (Ehlers) Sayers. She attended Colfax county rural school south of Leigh. One night at a dance at the Howells Ballroom she saw the man of her dreams, Elmer Dostal, and they were joined in holy matrimony August 31, 1950 at Holy Trinity Catholic Church at Heun. They farmed until 2010 when they moved to Dodge. Alvina was a member of the St. Wenceslaus Altar Society and the American Legion Auxiliary. She loved quilting and won many awards at fairs at both the county and state levels. She made quilts for all of her children, grandchildren and great grandchildren. She also enjoyed bowling, camping, traveling, cake decorating, cooking, doing yard work and working in her flower gardens. She had a Facebook account and followed her grandchildren and great grandchildren’s school and sporting events. Alvina died December 29th at the Parkview Home in Dodge where she had been a resident for the past year. Alvina is survived by her husband, Elmer of Dodge: daughters, Victoria (Larry) Hunke of Dodge and Bernice (John) Howard of LaVista; sons, Gary (Deb Wisnieski) Dostal of Omaha and Calvin (Kimberly) Dostal of Howells; 11 grandchildren; 14 great grandchildren; sisters, Dorothy Gall of Lincoln and Delores Toman of Clarkson; brother-in-law, Frank Svoboda of Howells. She is preceded in death by her brother, LaVern Sayers; sisters, Bertha Mastny, Velda Coufal and Valdean Svoboda. Family suggest memorials to Family Desire.

Alvina Dosta, 85, of Dodge died Friday, December 30, 2016 at Parkview Home in Dodge. Funeral service will be held at 10 A.M. Tuesday, January 3, 2017 at St. Wenceslaus Catholic Church in Dodge. Visitation will be held at the church on Monday... View Obituary & Service Information

The family of Alvina Dostal created this Life Tributes page to make it easy to share your memories.

Send flowers to the Dostal family.