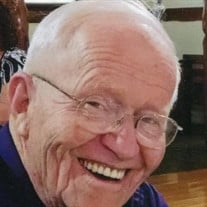 Funeral service for Amos Faltys, age 95 of Schuyler, will be held at 10:30 A.M. on Saturday, December 31, 2016 at the First Presbyterian Church in Schuyler. Visitation will be held on Friday from 3 PM to 7 PM at the Svoboda Funeral Home North Chapel. Burial will be in the Schuyler Cemetery with Military Honors presented by the Schuyler V.F.W. and American Legion. Amos died December 27th at his home in Schuyler. Amos was born July 25, 1921 in Schuyler to Joseph L. and Olga Marie (Oborny) Faltys. He attended rural school in Colfax County and graduated from Schuyler High School. Amos served in the Army during WW II and obtained the rank of Corporal. He was inducted September 24, 1942 and served with the 161st F.A. Battalion of the 35th Infantry Division and landed on Omaha Beach, France on D Day. He was also involved in the fighting in Normandy, Northern France, Rhine Land, Ardennes, Central Europe, Bastone Bulge and they were headed for Berlin until Russia insisted on taking Berlin. He discharged on November 4, 1945 and was awarded the American Defense Service Ribbon as well as a Good Conduct medal. On May 1, 1951 he and Maryann Sloup were joined in holy matrimony at the New Zion Presbyterian Church in Clarkson. They farmed in the Leigh area until 1972 when they moved to Schuyler. While living in Schuyler Amos worked for Kent Feeds, Schuyler Co-op, Schuyler Plumbing and Bruegger Plumbing. He was a member of First Presbyterian Church and served as Sunday School Superintendent and teacher for over 20 years and he was also a member of the V.F.W. He was a 12 gallon donor to the blood bank. Amos enjoyed visiting, playing cards, word search puzzles, jigsaw puzzles and he and Maryann loved to square dance in their younger years. Most of all he enjoyed helping people – he was happiest when he could help someone in need. Amos is survived by their four children, Marjorie Hernandez of Columbus, Shirley (Dave) Valish of Schuyler, Denise (Scott) Dubsky of Schuyler and Randy Faltys of Kearney; ten grandchildren; five great grandchildren. He is preceded in death by his wife of 65 years, Maryann (7/19/2016); infant daughter, Bonnie Jo Faltys; granddaughter, Sally Ann Cech; brothers, Arnold and Duane Faltys; sister, Delores Sindelar. Family suggest memorials to Family Choice. Funeral lunch will be served in the church fellowship hall.

Funeral service for Amos Faltys, age 95 of Schuyler, will be held at 10:30 A.M. on Saturday, December 31, 2016 at the First Presbyterian Church in Schuyler. Visitation will be held on Friday from 3 PM to 7 PM at the Svoboda Funeral Home North... View Obituary & Service Information

The family of Amos Faltys created this Life Tributes page to make it easy to share your memories.

Funeral service for Amos Faltys, age 95 of Schuyler, will be...

Send flowers to the Faltys family.