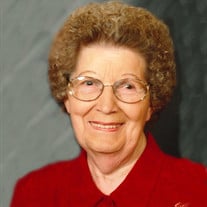 Arlene E. Doerneman, 87, formerly of Howells, passed away Thursday, August 29, 2019 at Dunklau Gardens in Fremont. Memorials can be directed to: Howells Public Library or Howells Community Fund Arlene E. Doerneman was born on December 18, 1931 on the family farm near Howells to Theodore and Dorothea (Pieper) Hegemann. Arlene graduated from Howells High School and after graduation went on to work at Hormel in Fremont. On August 2, 1955 she married Reuben Doerneman at S.S. Peter and Paul Catholic Church in Howells. Together Reuben and Arlene purchased and ran Doerneman Hardware in Howells for many years. While Reuben was known around town for being “Mr. Fixit”, Arlene kept just as busy raising their seven children and still found time to work at the Clarkson and Dodge nursing homes and for volunteer work. She enjoyed working out in her garden tending to her flowers and harvesting her crop that she would later cook with or can. Arlene enjoyed getting together with her craft club and helping out with the Legion Auxiliary and Christian Mothers. She was exceptionally good at cooking, baking, and sewing and loved getting together with her family. Survivors include her sons: Jeff(Doris) Doerneman of Gilbert, AZ, Randy(Gretchen) Doerneman of Norman, OK, Doug(Paula) Doerneman of Omaha, Russ(Lori) Doerneman of Goddard, KS; Daughters: Deb(Ray) Matthes of Golden, CO, Lois(Pat) Diederich of Elkhorn, Linda (Wade) Stahlecker of Fremont; 24 Grandchildren; 6 Great Grandchildren; Sister: Sister Dorothy Myriam of Milwaukee, WI; brothers: Robert (Alice) Hegemann of Fremont, Victor (Mary Ann) Hegemann of Richardson, TX; sisters-in-law: Arlene Hegemann of Dodge, JoAnn Hegemann of Howells, Joyce(Ken) Schlickbernd of Beemer, Viola Doerneman of Fremont, and LaVaine Doerneman of West Point. She was preceded in death by her parents, husband Reuben (2017); brothers Adolph, Raymond, Leonard, and Joe Hegemann; sisters: Sister Dorelia, Adella Fendrick, Marie Kruger, Helen Schlautman, Kathleen Baumert; and brothers-in-law: Marvin Howard and Wilber Doerneman.

The family of Arlene E. Doerneman created this Life Tributes page to make it easy to share your memories.

Send flowers to the Doerneman family.