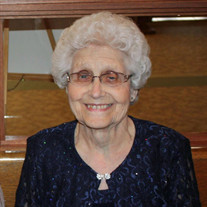 Arlene Dostal, 94, of Howells, passed away on Monday, April 27, 2020 at the Parkview Home in Dodge. Memorials can be made to Family Wishes. ***The family requests that in lieu of flowers and plants to designate a memorial.*** A private family Mass of Christian Burial will be held on Tuesday, May 5, at 10:30 a.m. at S.S. Peter and Paul Catholic Church in Howells, with Fr. Stan Schmit officiating. The mass will be streamed via the Svoboda Funeral Home Facebook page at: www.facebook.com/SvobodaFH. A public visitation with no family present will be held Monday from 5 until 7 p.m. at the church. The visitation will be limited to 10 people in the church at one time. Interment will be in the S.S. Peter and Paul Cemetery. Arlene (Dirkschneider) Dostal was born on October 3, 1925 on a farm near Olean, NE to Henry and Anna (Wietfeld) Dirkschneider. Arlene lived her entire life in Howells. She is a 1943 graduate of Howells High School. On October 23, 1945 she was united in marriage to Herman Dostal at Olean Catholic Church. To their union were born six children: Linda, Glenn, Karen, Judy, David, and Brian. After their marriage they engaged in farming until 1960 when they moved to Howells. Arlene was a loving mother, grandmother, great-grandmother, and loyal friend to all who knew her. In addition to serving as a wonderful homemaker to her family she also was employed as a cook at the high school cafeteria. Arlene was a devout and active member of Sts. Peter and Paul Catholic Church. She was very active in the Howells community and could always be counted on in time of need. She loved spending time with family and friends. Her most enjoyable times were spent with her grandchildren and great-grandchildren who also loved being around Grandma. She was deeply loved and will be greatly missed by all who knew her. Survivors include sons: Glenn Dostal of Omaha, and David (Connie) Dostal of Howells; daughters: Linda (Bob) Limbach of Blair, NE, Karen (Mike) Baumert of Omaha, NE, and Judy (Marc) Taylor of Cecil, WI; 12 grandchildren and 20 great-grandchildren. Arlene is preceded in death by her husband Herman in 2009, infant son Brian, and siblings Wendelin, Leonard, Adeline, Valerie, Arlitha, and Lorraine. She was the last survivor of the Dirkschneider/Dostal Family.

Arlene Dostal, 94, of Howells, passed away on Monday, April 27, 2020 at the Parkview Home in Dodge. Memorials can be made to Family Wishes. ***The family requests that in lieu of flowers and plants to designate a memorial.*** A private family... View Obituary & Service Information

The family of Arlene Dostal created this Life Tributes page to make it easy to share your memories.