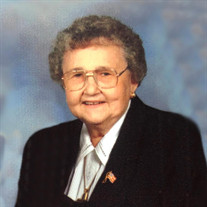 Arlene Ann (Dubsky) Wachal 87, of Schuyler went to be with the Lord on December 7, 2020, at CHI St. Elizabeth’s Hospital, Lincoln, NE. In lieu of plants, flowers, and statues memorials can be directed to the Wachal Family for later designation. A family Mass of Christian Burial will be said for Arlene at St. Mary’s Catholic Church in Schuyler with burial in the Schuyler Cemetery. The Rosary and Mass will later be posted to the Svoboda Funeral Home Facebook page and website. Her family encourages friends to leave their condolences on the funeral home website on the tribute wall. A celebration of life for Arlene will be held at a later date. Arlene was born on December 10, 1932, in Schuyler, to Frank and Adella (Vacha) Dubsky. She married Matthew R. Wachal on November 29, 1950 at St. Mary’s Catholic Church, Schuyler. They lived on the Wachal family farm west of Schuyler for 33 years before moving to Schuyler. Arlene survived polio at the age of 16. As a teenager she worked at Dubsky’s IGA. She graduated from Schuyler High School. Later she decorated many cakes for people and worked at Johnnies Steak House for ten years. She worked at the Schuyler High School as the head cook for 25 years until her retirement in 2005. Matt and Arlene liked to travel and started the Happy Travelers Tour Company, which they ran from 1997-2009. Arlene’s hobbies were crocheting, baking, reading, and working puzzle books. Arlene was baptized, received First Communion, Confirmation, and was married all at St. Mary’s Catholic Church, Schuyler. She belonged to the St. Mary’s Guild, then Women of Divine Mercy. In 1979 Matt and Arlene made a Cursillo weekend. After that they worked for many weekends cooking for Cursillo. Preceding her in death were her parents and her husband, Matt, of almost 60 years, in 2010. Survivors are 3 daughters, 2 sons, 10 grandchildren, and 12 great-grandchildren. Daughter- Teri (Bill) Chromy of Linwood and children: Annie (Josh) Akehurst, Kati (Sam) Settles, Billy (Nicki) Chromy, Julie (Tanner) Hoffman, Sarah (Cory) Kruse; Son- Daniel Wachal of Schuyler Daughter- Marilynn (Tony) Vanek of Gretna and children: Cindy, Mark, and Brian Vanek Daughter- Donna (Kelly) Misek of Schuyler and children: Kelly Jr. and Cory Misek Son- Matthew F. (Nida) Wachal of Schuyler Brother- Dennis (Donna) Dubsky of Columbus Several Nieces and Nephews.

Arlene Ann (Dubsky) Wachal 87, of Schuyler went to be with the Lord on December 7, 2020, at CHI St. Elizabeth&#8217;s Hospital, Lincoln, NE. In lieu of plants, flowers, and statues memorials can be directed to the Wachal Family for later designation. A... View Obituary & Service Information

The family of Arlene A. Wachal created this Life Tributes page to make it easy to share your memories.

Arlene Ann (Dubsky) Wachal 87, of Schuyler went to be with the...

Send flowers to the Wachal family.