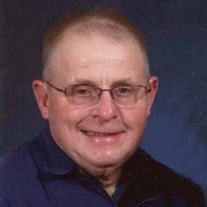 Benjamin Huber, 85, of Schuyler passed away Thursday June, 7th at Immanuel Hospital in Omaha. Memorials can be directed towards St. John's Lutheran Church. Benjamin Dwight Huber, was born February 20, 1933, to George and Daisy (Price) Huber at St. Mary’s Hospital in Nebraska City. Ben graduated from Nebraska City High School in 1950, enlisted in the United States Marine Corps in 1952, and then attended the Nebraska State Trade School in Milford, graduating with a certificate in Welding and Farm Machinery. Ben married his sweetheart Pauline M. Mueller on May 13, 1956 where they lived in the Omaha/Valley area on an acreage. Ben, Pauline, and their children moved to a farm north of Schuyler in March, 1969. Ben’s farming operation consisted of producing top notch feeder pigs and various crops. Early on in his farming days, Ben worked at different jobs in the Columbus area to help support his love of farming and eventually farming became his full-time occupation. They moved to their Schuyler home in 1994. Ben continued working until he was 84 years young with his last employment as a Grounds Maintenance Crew member for Columbus Central Community College for 11 years. He loved the outdoors, deer hunting, fishing, and could imitate the whistle of multiple birds. You could always find Ben glued to the TV on Husker and Yankee game days. He came to a saving knowledge of Jesus as his Savior and passed from this life to the next in great peace. Ben is survived by his wife, of 62 years, Pauline of Schuyler, one son Steven W. Huber of Mitchell, SD; two daughters: Peggy Huber of Great Falls, MT and Julie (Mike) Orso of Great Falls, MT; three grandsons: Trevor, Nathan, and Caleb Orso; Sisters: Mary Staack of Syracuse, NE; Dorothy Gruenemeyer (twin sister) of Indianapolis, IN; Yvonne Smith of Meridian, ID; Karen Reinecke of Hughson, CA; sister-in-law Joan Huber of Nebraska City, and numerous nieces, nephews, other relatives, and friends. Ben was preceded in death by his parents, George and Daisy Huber, brother Bruce, and sister Beatrice Stastny. The family wishes to extend their gratitude to all friends and family for their prayers, love, and support.

The family of Benjamin Huber created this Life Tributes page to make it easy to share your memories.

Send flowers to the Huber family.