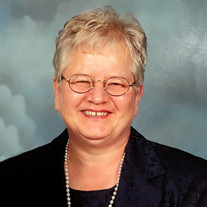 Betty Henggeler, 72, of Schuyler passed away on Saturday, December 11, 2021 at Mercy One Hospital in Sioux City, Iowa as the result of her battle with the COVID-19 Virus. Betty has joined her mother, Emily Knapp, in death. Emily passed on November 26, 2021 at the age of 94 at David Place in David City. Memorials can be directed towards the Schuyler Rescue Squad or the Servants of the Heart of the Father. Following Betty’s wishes she has been cremated. Due to her battle with COVID, Betty’s family encourages everyone in attendance for the visitation and the mass please wear a face mask to help limit the spread of COVID-19. A Memorial Mass of Christian Burial for Betty Henggeler and Emily Knapp will be held at 10:30 on Friday, December 17, 2021 at St. Mary’s Catholic Church in Schuyler with Fr. Gerry Gonderinger officiating. Family greeting friends will take place Thursday from 5 until 7 p.m. with a parish rosary recited at 7 p.m all at St. Mary's. Lunch will follow mass at St. Mary’s Social Hall and burial of ashes will take place at 2 p.m. Friday at Holy Cross Cemetery. Svoboda Funeral Home is handling arrangements for the family. Mass will be live streamed to the Svoboda Funeral Home Facebook page beginning 10 minutes prior to service. www.facebook.com/SvobodaFH/ Betty Jane was born on February 23, 1949 to Lumir and Emily (Juva) Houdek in Clarkson, Nebraska. Betty graduated high school from Clarkson and received formal training as a Nurse. Through her sister Janet, Betty met Ronald P. Henggeler and they later married on January 3, 1970 at. St. Bonaventure Catholic Church in Columbus. After marriage Betty took on the role of running the homestead and taking care of their five children. Betty devoted much of her life to helping people, from raising five children and attending all of their sporting events to volunteering at the senior center and delivering meals on wheels. Later in life Betty also took care of her mother Emily, and would take her to appointments and assist with day-to-day activities. She was very devoted to her church and helped to teach religious education classes, lead many rosaries, and helped wherever needed at church. Betty loved gardening and took great pride in her vegetable gardens and its produce, she enjoyed spending time at the Benedictine Mission house, and also loved spending time with the Betty’s Club. Betty is survived by her husband of 51 years Ron of rural Schuyler, her children: Theresa (George) Langabeer of Omaha, Keith (Sandra) Henggeler of Schuyler, Rhonda (Clement) Wiederholt of Maryville, Missouri, Anne (Randy) Gerdes of Leshara, Nebraska, and Sandra “Mogi” (Christopher) Schuster of Sherman, Texas; nine grandchildren and two great-grandchildren; brothers Dennis (Dorothy) Houdek of Lincoln and Donald Houdek of Schuyler; sister Janet (Earl) Koch of Norfolk as well as many nieces and nephews. She is preceded in death by her parents, step-father Steve Knapp, sister Arlene Houdek and grandson Carson Schuster.

Betty Henggeler, 72, of Schuyler passed away on Saturday, December 11, 2021 at Mercy One Hospital in Sioux City, Iowa as the result of her battle with the COVID-19 Virus. Betty has joined her mother, Emily Knapp, in death. Emily passed on November... View Obituary & Service Information

The family of Betty J. Henggeler created this Life Tributes page to make it easy to share your memories.

Betty Henggeler, 72, of Schuyler passed away on Saturday, December...

Send flowers to the Henggeler family.