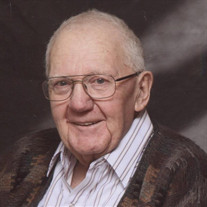 Funeral mass for William A. “Bill” Wisnieski, age 80 of Howells, will be held at 10:30 AM on Monday, November 16th at St. John’s Catholic Church in Howells. Visitation will be held at the church on Sunday from 3 PM to 7 PM with rosary recited at 4 PM and 7 PM and visitation on Monday will resume at 9:30 AM. Bill died November 10, 2015 at Parkview Home in Dodge. Bill was born in rural Dodge on May 2, 1935 to William P. and Margaret (Vlach) Wisnieski. He attended Sacred Heart Academy at Olean and Dodge High School. He worked the family farm after his Dad passed away in 1950. Bill and Patricia Kauffold were married August 21, 1954 at St. Joseph’s Catholic Church in Dodge. They moved to Howells in 1963. Bill drove truck for several firms before working at the Howells Elevator where later became Manager. In 1973 he and Pat purchased the grocery store in Howells and called it Bill’s Food Mart. He thought with a large family it might be worth it to own a grocery store. Bill was a member of the Knights of Columbus, was a volunteer fireman, served on the Town Board and was a past president of the Community Club. He and Pat served on the board of the former Howells Retirement Center. They were both active in their church and community and supported them wholeheartedly. Bill and Pat were inseparable; they collected cookie jars; they worked side-by-side and above all, they loved their family. Bill will be remembered as a community leader and was never at a loss for words. He was at his best at work and interacting with people. Bill is survived by their children: Pam (Adrian) Barta of Howells, Keith (LeAnn) Wisnieski of Revanna, NE, Joy (Rich) Groene of Omaha, Judy (Doug) Gaswick of Imperial, NE, Lynn Koch of Omaha and Billie Wisnieski of Howells, 13 grandchildren, 9 great grandchildren (with one more on the way), brother, Dan (Chris) Wisnieski and brother-in-law Ralph “Mike” Parr all of Schuyler. He is preceded in death by his wife Pat (October 16, 2015), infant son Thomas, son-in-law, Jeff Koch, parents and step father Edward Svoboda and sister Margaret “Sis” Parr. In lieu of flowers the family suggest memorials to the Howells Community Fund or cancer research. The funeral lunch will be served at St. John's Hall following the funeral.

The family of Bill Wisnieski created this Life Tributes page to make it easy to share your memories.

Funeral mass for William A. “Bill” Wisnieski, age 80 of Howells,...

Send flowers to the Wisnieski family.