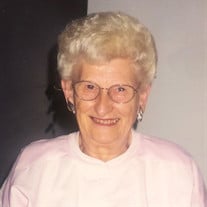 Blanche A. Luscher, 96, of Omaha, formerly of Schuyler, passed away Friday, July 10, 2020, at Remington Heights in Omaha. Memorials can be directed towards the Schuyler Community Garden. A funeral service will be held on Wednesday, July 15, at 10:30 a.m. at Svoboda Funeral Home-South Chapel with Rev. Sarah Gengler officiating. Visitation will be held Wednesday from 9:30 until 10:30 at South Chapel. Current COVID-19 measures will be in place. Interment will be held in the Schuyler Cemetery. Blanche Luscher was born on September 12, 1923, on the family farm north of Richland to Joseph and Emily (Abraham) Sindelar. She attended District 6 and graduated from Schuyler High School in 1941. On May 10, 1947 Blanche married Leonard “Bud” Luscher in Hiawatha, Kansas. Leonard passed away on January 30, 1991. Blanche later met Arnold “Arnie” Pedersen and the couple was later married on April 4, 1992 in Omaha. Throughout her life, she worked in Omaha for Webber Motors, Jewel Tea, and Four Seasons Heating and Air. From a very young age, Blanche loved to dance and spent her entire life dancing as a hobby. After the passing of her first husband, Bud, she attended three to four dances a week and eventually met her second husband, Arnie, at a dance. Blanche remained an avid dancer well into her 90’s until she was no longer able. She loved to garden and would plant many types of vegetables and flowers. Blanche was known for her amazing kolaches and poppy seed bread, many friends and neighbors always eagerly awaited her Christmas “goodie basket” that included her expertly prepared baked goods and candies. Blanche had a love for Polka music and listened to it often. As a little girl, her father played in a Polka band and Blanche often attended many of their shows and dances. Blanche is survived by several nieces and nephews. She is preceded in death by her parents; first husband Leonard Luscher in 1991 and second husband Arnie Pedersen in 1992; sister Emma Hake; brothers Joe Jr., Longin, and James Sindelar.

Blanche A. Luscher, 96, of Omaha, formerly of Schuyler, passed away Friday, July 10, 2020, at Remington Heights in Omaha. Memorials can be directed towards the Schuyler Community Garden. A funeral service will be held on Wednesday, July 15,... View Obituary & Service Information

The family of Blanche A. Luscher created this Life Tributes page to make it easy to share your memories.

Blanche A. Luscher, 96, of Omaha, formerly of Schuyler, passed...

Send flowers to the Luscher family.