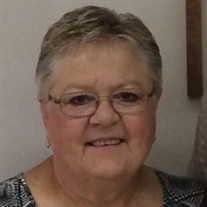 Carolyn Peters, 75, of Schuyler passed away, Monday, June 28, 2021 at CHI Schuyler Memorial Hospital. Memorials can be directed towards Family Wishes for later designation. Mass of Christian Burial will be held on Thursday, July 1, at 10:30 a.m. at St. Augustine Catholic Church in Schuyler, with Fr. Gerry Gonderinger officiating. Visitation will be held Wednesday from 5 until 7 p.m. with a parish rosary recited at 7 p.m. all held at St. Augustine's. Interment will be in the Schuyler Cemetery with lunch following in the St. Augustine Social Hall. Carolyn Mae (Oborny) Peters was born in Columbus, Nebraska on March 15, 1946 to Stanley and Sylvia (Fendrick) Oborny. She attended grade school in rural Colfax County and graduated from Schuyler High School with the class of 1964. Following high School, she worked for Dale Electronics in Columbus. On August 19, 1967, Carolyn married her high school sweetheart Larry Peters at Wilson Catholic Church in rural Colfax County, they were married for 53 years. After they married, while Larry finished college in Lincoln, she worked for the State of Nebraska Tax Division. After Larry’s graduation they moved to Des Moines, Iowa, for 2 years and then in 1970 moved back to Schuyler. After deciding to build their own home in 1978, Carolyn became Larry’s number one helper during the building of their home. Starting in 1980, she worked as a paraeducator in the Schuyler school system for 12 years before retiring to spend more time with family. Carolyn was a member at St. Augustine Catholic Church and the Little Flower Altar Society where she served two terms as president. During her tenure Carolyn was involved with outfitting the kitchen in the new church hall. Carolyn was a dedicated mother and grandmother. You could always find her at one of her grandchildren’s ball games or activities. She loved her family and attended as many of their functions as possible. She loved to golf and she loved to shop. Carolyn also loved working outside in her yard and was an avid husker fan. Carolyn is survived by her husband Larry of Schuyler, daughters Kelly (Ernie) Schulz of Ozark, MO and Deb (Scott) Cunningham of Omaha, NE; seven grandchildren: Ryan and Hallie Schulz of Ozark, MO, Tyler and Paige Cunningham of Omaha, Cole Jedlicka of Lincoln and, Kyle and Brady Jedlicka of Schuyler; and four nieces and nephews. She is preceded in death by her parents Stanley and Sylvia Oborny, daughter Becky Peters, and sister Gladys Husak.

Carolyn Peters, 75, of Schuyler passed away, Monday, June 28, 2021 at CHI Schuyler Memorial Hospital. Memorials can be directed towards Family Wishes for later designation. Mass of Christian Burial will be held on Thursday, July 1, at 10:30... View Obituary & Service Information

The family of Carolyn M. Peters created this Life Tributes page to make it easy to share your memories.

Send flowers to the Peters family.