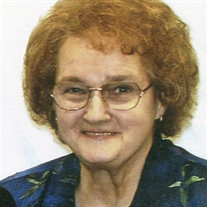 Clara Ann (Schneider) Meister, 83, of Schuyler passed away Monday, December, 18, 2017 at the Schuyler Care and Rehabilitation Center. Memorials can be directed towards the Alzheimer's Association or Family Wishes. Clara was born on Dec. 28, 1933 in rural Blair, NE to Peter and Clara (Benck) Schneider. She grew up on a farm and attended Wranch school, Dist. 25. She graduated from Blair High School in 1953. After graduating she moved to Sidney, NE and worked there. She moved back to Fremont, NE and got a job at Gambles warehouse where she met her husband, Lawrence Meister. They married on Oct. 11, 1958 at St. Patrick's Church in Fremont, NE. To this marriage four children were born. After marriage, Clara was a stay home mother who lovingly cared for her children as well as countless other children and loved them as much as her own. Clara was a Cub Scout leader while living in Fremont and was an active member of St. Patrick's Church. In 1975 they moved to Schuyler, NE after purchasing the Gambles store. There she worked along side her husband and children until it closed in 1984. After the closing of the store, Clara cared for the elderly by doing their laundry, ran errands for them, went to Doctor appointments and assisted them with their daily life. She then offered her babysitting services to families in Schuyler. Later she worked at Schuyler Elementary School in the kitchen serving meals to the children. She truly cherished seeing all of the children every day. Clara was an excellent cook who collected many recipe books along the way. If you left the table hungry, it was your own fault. Family gatherings were an important thing for her to plan. She also excelled at canning and baking. One of her greatest joys was making and decorating cakes for her children and grand ones. She was an avid family picture taker, who would mark the event with photos for her large collection of photo books. She spent countless hours working on family genealogy for her family as well as her husband’s family. Clara also enjoyed playing card games, doing word search puzzles, listening to polka music, and going on Gambles market trips. Clara was a very loving wife and mother, aunt, grandmother, and great-grandmother who always shared her love with them. She said she never stopped worrying about her children, even when they were grown adults. Clara was a member of St. Mary’s Church in Schuyler, and a member of Divine Mercy Guild. She is survived by her husband Lawrence, four children, Diane (Rick) Fendrick, Donald (Deborah) Meister, Dean Meister all of Schuyler, Donna Meister, Lincoln, NE. Grandchildren Derrick Fendrick and Ashley (Fendrick) Zastera, Schuyler, NE, Jason and Justin Meister, both of Omaha, NE, Jordan Meister, Schuyler, TJ White, Lincoln, NE. Great-Grandchildren Kelly, Raymond and Anthony Zastera, Schuyler. Sisters Marilyn (Raymond) Clapper, Ames, NE and Wilma Jean(David) Geary, Fruita, CO and numerous nieces and nephews. She was preceded in death by her parents Peter and Clara (Benck)Schneider, sister Geraldine Storjohn, brothers Alvin (infant), Stanley, Bill, and Robert Schneider.

Clara Ann (Schneider) Meister, 83, of Schuyler passed away Monday, December, 18, 2017 at the Schuyler Care and Rehabilitation Center. Memorials can be directed towards the Alzheimer's Association or Family Wishes. Clara was born on Dec. 28,... View Obituary & Service Information

The family of Clara Meister created this Life Tributes page to make it easy to share your memories.

Send flowers to the Meister family.