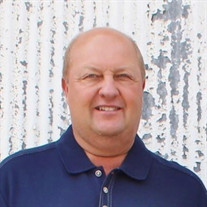 Dale Allen Jedlicka passed away Friday, June 5, 2020, surrounded by his wife and children. Memorials can be directed towards Family Wishes. Mass of Christian Burial will be held on Wednesday, June 10 at 10:00 a.m. at St. Isidore’s Catholic Church in Columbus, with Fr. Gerry Gonderinger officiating. Socially distanced seating will be observed for the Mass and vigil, those in attendance are required to wear face masks as well as for the visitation. Visitation with no family present will be held on Tuesday from 4:00 until 6:45 at St. Isidore’s with a vigil service held at 7:00 p.m. Guidelines outlined by the Directed Health Measures mandate 25 people will be allowed to enter the church at one time. Interment will be held in the Schuyler Cemetery at 11:45 a.m. on June 10. Svoboda Funeral Home of Schuyler is handling arrangements for the family. Dale was born July 7, 1964 in Schuyler, Nebraska to Gordon and Maxine Jedlicka. He graduated from Schuyler Central High School in 1982 and graduated from Southeast Community College in Milford with a degree in Diesel Mechanics. Dale married the love of his life, Audra Sterling, December 27, 1985. They welcomed a son, Clint, in 1986 and their daughter, Ashley, in 1989. Dale began his married life living in his grandparent’s house in rural Linwood, Nebraska. In 1990, Dale and Audra purchased a home near the family farm, but eventually, the couple moved to the main farm where Dale grew up. It gave Dale great pride to continue the legacy so many had built before him. In 2017 they built their dream home on Lake Socorro in Schuyler. Dale’s favorite thing was being by the lake and watching his grandkids enjoy swimming. His grandchildren and family were the light of his life. Dale spent his life doing what he loved, farming. It was his joy to farm next to his dad, then an even bigger joy farming with his son. He loved the tradition, caring for the land, caring for cattle, and took great pride in leaving the dirt better for the next generation. Dale was always the first to step up and serve his community. He served on the District 5R School Board, was a Knights of Columbus member, an FFA Alumni Officer, a Lost Creek 4H Club Leader, and a member of Divine Mercy Parish in Schuyler. He loved playing cards with friends, volleyball, and enjoyed traveling the world with Audra and their friends. He is survived by his wife of 34 years, Audra of Schuyler; son Clint of Schuyler and daughter, Ashley (Jarett) Andersen of Blair; grandchildren Haley, Eli and Kasey Andersen of Blair; mother Maxine Jedlicka of Schuyler; sister Theresa Starkey of Lincoln; sister Dawn (Brian) Sucha of Columbus; brother Todd (Lois Kampschnieder) Jedlicka of Schuyler; brother-in-law Glen (Sissy) Sterling of Huron, South Dakota; multiple nieces and nephews; and aunt Shirley Jedlicka of Schuyler. Dale was preceded in death by his father, Gordon Jedlicka; mother- in-law Lani Sterling; father-in-law Glen Sterling; grandparents Gerald and Libby Viglicky; grandparents Adolph and Vlasta Jedlicka; nephew Darick Starkey; and uncle Marvin Jedlicka.

Dale Allen Jedlicka passed away Friday, June 5, 2020, surrounded by his wife and children. Memorials can be directed towards Family Wishes. Mass of Christian Burial will be held on Wednesday, June 10 at 10:00 a.m. at St. Isidore&#8217;s... View Obituary & Service Information

The family of Dale A. Jedlicka created this Life Tributes page to make it easy to share your memories.