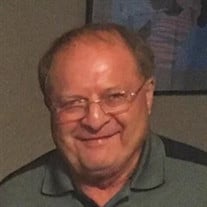 Daniel Jakub, 72, of Schuyler passed away on Thursday, November 4, 2021 at St. Elizabeth Hospital in Lincoln. We ask that those wanting to purchase flowers not do so through this website as they are not guaranteed for weekend services, as the website states they are. Please contact a local florist directly and they can assist you with an order. Memorials can be directed towards Family Wishes for later designation. Mass of Christian Burial will be on Monday, November 8, at 10:30 a.m. at St. Mary’s Catholic Church in Schuyler with Fr. Gerald Leise officiating. Visitation will be Sunday from 4 until 6 p.m. with a KOC Rosary at 6 p.m. all at St. Mary’s. Visitation will resume Monday from 9:30 until 10:30 at the church. Military Honors are provided by V.F.W. Hespen Mitchell Post #4836, with lunch following in St. Mary’s Social Hall. Interment will be in the Omaha National Cemetery on Friday, November 12, at 9 a.m. Svoboda Funeral Home is handling arrangements for the family. Dan's Funeral Mass will be Live Streamed to the funeral home Facebook page beginning within 10 minutes of service time. www.facebook.com/svobodafh Remembering his servant heart, love of his family, faith and country is what comes to mind when you recall the legacy of Dan Jakub. Dan was a dedicated father to his three children, Chris, Dwayne and Jenni. Always coaching, mentoring, and never missing an event. His grandchildren, Carissa, Connor, Camryn, Elliot, Megumi, Charles, Oliver, Emelia, Noah, and Jonah enjoyed this same dedication from Grandpa Jakub. The loyalty Dan committed to his faith and his family was also evident in his 47-year career with Cargill, preceded by his patriotism and service to the armed forces. Dan served his country in Vietnam and continued his dedication to the military through his volunteer work throughout his life. One of his proudest memories was being chosen for the Vietnam Honor flight. Dan was born to Mildred L. (Hula) Jakub and Edward Paul Jakub, in David City, Nebraska on November 12, 1948. Growing up on the farm in Brainard, with his siblings Sharon, Leon and Dale. After honoring his country by serving in Vietnam, Dan returned to Schuyler and married Kathleen Plasek, of David City. Dan and Kathy made a home and raised their three children in Schuyler, Nebraska instilling work ethic, pride of country and faith as a guide for life. Later in life Dan met his best friend and wife of 20 plus years, Sally Mevert Jakub and married March 4, 2000. Sally and Dan have enjoyed adventures including their annual trip to Nashville, never missing a local country music concert, and trips all over Kansas and Nebraska to see their family. Dan never got enough of Sally’s cooking and Sally in turn never had a dirty car! The life they shared, blending both of their families seamlessly is treasured by all that knew and loved them. Our fond memories include Dan’s love of the Huskers, he was always a loyal fan! He had great interest in the weather and considered himself an amateur meteorologist. He was a talented horseshoe marksman back in the day with numerous trophies from tournaments across Nebraska. If you ever needed to know the current gas prices, Dan was the person to ask! Dan’s servant heart will truly be missed. Their family members include; wife Sally, brother Leon and Geri Jakub of Brainard, Nebraska, children Christopher Jakub, Dwayne and Stephanie Jakub all of Wichita, Kansas, Jenni Demeray and Chris Polacek, David City, Ryan and Tomomi Reeson Scribner, NE, Todd and Jennie Reeson, of Omaha and Chad and Ryleigh Reeson of Elkhorn and Mother-in-law Norma Schlickbernd of West Point and 10 grandchildren, numerous nieces and nephews and friends throughout the community. Dan’s beloved family members, mother and father, brother Dale, his sister Sharon, and Father-in-Law Harold Schlickbernd preceded him in death.

Daniel Jakub, 72, of Schuyler passed away on Thursday, November 4, 2021 at St. Elizabeth Hospital in Lincoln. We ask that those wanting to purchase flowers not do so through this website as they are not guaranteed for weekend services, as... View Obituary & Service Information

The family of Daniel E. Jakub created this Life Tributes page to make it easy to share your memories.

Daniel Jakub, 72, of Schuyler passed away on Thursday, November...

Send flowers to the Jakub family.