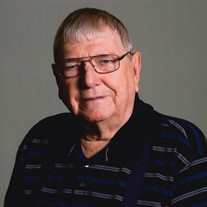 Delvin Hegemann, 83, of Howells passed away at his home in Howells on Wednesday, February 17, 2021. Memorials can be directed towards Family Wishes for later designation. Mass of Christian Burial will be Monday, February 22, 2021 at 10:30 a.m. at St. John Nepomucene Catholic Church in Howells with Fr. Stan Schmit officiating. Visitation will be Sunday from 4 until 6 p.m. at the church with a vigil service held at 6 p.m. Masks will be required for the visitation and Mass. Interment will be in St. John’s Catholic Cemetery with lunch following at the Howells Catholic Social Hall. Svoboda Funeral Home is handling arrangements for the family. Mass will be live streamed to the Svoboda Funeral Home Facebook Page: www.facebook.com/SvobodaFH/ Delvin was born on September 14, 1937 to Herman and Julia (Vogel) Hegemann. He attended Colfax County Schools. He then worked as a mechanic at the Auto Hospital, drove cattle truck for Brester Trucking, and for the next 38 years drove a gas transport for Farmers Union Coop. On October 23, 1956 Delvin married Marlene Krupka at St. Wenceslaus Catholic Church in Dodge. The couple made their home in Howells and were blessed with four children Bruce, Cheryl, Theresa, and Russell. Delvin was a member of the Howells Volunteer Fire Department. and served as chief. He was also an active member of St. John Nepomucene Catholic Church. He could fix about anything. He enjoyed traveling, listening to polka music, watching westerns, and reading the daily paper. Delvin also enjoyed cheering on the Howells-Dodge Jaguars and playing a good game of cards, but most of all he loved spending time with his family and grandson. He is survived by his children: Bruce(Manuela) Hegemann of Colorado Springs, CO, Cheryl(Wayne) Molacek of Howells, and Russ Hegemann of Schuyler, grandson Ryan Molacek of Howells, in-laws: Joseph(Toni) Krupka of Plattsburg, NY, Melvin(Mag) Krupka of St. Helena, CA, Richard(Vi) Krupka of Schuyler, Ronald(Mary) Krupka of Rapid City, SD, Duane Krupka of Pahoa, HI, Kenneth(Vicky) Krupka of Beemer, Eugene(Karen) Krupka of Fremont, Raymond(Lynda) Krupka of Naverra, FL, and Glenn Krupka of Sioux Falls, SD and sister-in-law Mae Lund of West Point, as well as many nieces and nephews. Delvin was preceded in death by his parents, his wife of 60 years Marlene in 2017, daughter Theresa, sister Mildred (Lumir) Dostal, parents-in-law Joseph and Philomena “Minnie” (Gall) Krupka, and brothers-in-law Marvin (Helen) Krupka, Larry Krupka and Larry Lund; and sister-in-law Gail Krupka.

Delvin Hegemann, 83, of Howells passed away at his home in Howells on Wednesday, February 17, 2021. Memorials can be directed towards Family Wishes for later designation. Mass of Christian Burial will be Monday, February 22, 2021 at 10:30... View Obituary & Service Information

The family of Delvin Hegemann created this Life Tributes page to make it easy to share your memories.

Delvin Hegemann, 83, of Howells passed away at his home in Howells...

Send flowers to the Hegemann family.