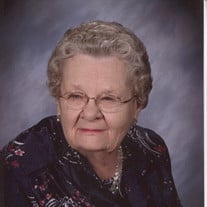 Dolores Margaret Cech, of Dodge, formerly of Schuyler, passed away Monday, May 25, 2015 at Columbus Community Hospital in Columbus. Funeral services will be held at 10:30 A.M. Thursday, May 28th at the First Presbyterian Church in Schuyler. Visitation will be Wednesday, May 27th from 4:00 P.M. to 8:00 P.M. at the Svoboda Funeral Home North Chapel with a Prayer Service at 7:00 P.M. Burial will be in the Schuyler Cemetery. Dolores was born July 21, 1927, at Cedar Bluffs, Nebraska, the daughter of George and Mary (Brousek) Petersen. She received her elementary education at a Dodge county rural school district and graduated from North Bend High School in 1945. She married Frank L. Cech on September 21, 1948 at St. Patrick’s Church at Clyde, North Bend, Nebraska. They lived in Schuyler where Schuyler Lumber is now located. They purchased the George Keller farm northwest of Schuyler where they moved in 1963. She was a member of First Presbyterian Church, Shipmates and the Friendship Circle. She entered the Parkview Nursing Home in Dodge on February 20, 2014. Dolores enjoyed her family and prepared food and baking for all the holiday gatherings and celebrations. She especially enjoyed Christmas with gifts for all her grandchildren and great grandchildren. She loved flowers, her garden, canning, sewing, quilt making and puzzles. She also enjoyed Czech music and they enjoyed polka dances in their earlier years. In her later years, she enjoyed traveling, including a trip to the Czech Republic. She is survived by 10 children; LaVaine (Rudy) Novak of Howells, twins: Donald (Denise) Cech of Howells and Marilyn Stoklasa of Clarkson, Galen Cech of Schuyler, Ronald (Dawn) Cech of Howells, John (Julie) Cech, Robert Cech, Dennis Cech and Daniel Cech all of Schuyler, and Nancy (Dan) Martensen of Columbus; 21 grandchildren, 18 great grandchildren, 2 step grandchildren, a sister, Dorothy Parr of Dodge, and two sisters-in-law: Ella Petersen and Dorothy Petersen, both of North Bend. Dolores was preceded in death by her parents, husband Frank in 1988, son-in-law Duane Stoklasa, grandson Zachary Cech, brothers Leo & Orvil Petersen and brother-in-law, Lambert Parr. The family suggests memorials to the First Presbyterian Church in Schuyler or the Donor’s Choice.

Dolores Margaret Cech, of Dodge, formerly of Schuyler, passed away Monday, May 25, 2015 at Columbus Community Hospital in Columbus. Funeral services will be held at 10:30 A.M. Thursday, May 28th at the First Presbyterian Church in Schuyler.... View Obituary & Service Information

The family of Dolores M. Cech created this Life Tributes page to make it easy to share your memories.