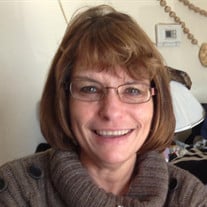 A Mass of Christian Burial for Donna M. Koliha, 56, of Howells will be held at 10:30 A.M. Saturday, June 20th at S.S. Peter & Paul Catholic Church in Howells. Visitation will be held on Friday, June 19th from 4:00 P.M. to 7:30 P.M. at S.S. Peter & Paul Catholic Church with a Parish Rosary at 7:30 P.M. Visitation will continue on Saturday one hour before services at the church. Burial will be in S.S. Peter & Paul Catholic Cemetery in Howells. Donna passed away Wednesday, June 17th in Omaha. Donna was born on April 3, 1959 in Cuming County to Robert and Valfred (Doescher) Dirkschneider. She graduated from Howells High School in 1977. Donna was married and raised 3 kids. She later moved to Howells where she worked as a waitress. She was a member of S.S. Peter & Paul Catholic Church. She enjoyed walking, loved baking, her dog Maggie, her customers at the Grain Bin and especially spending time with her grandkids. Donna is survived by a daughter, Sarah Koliha of Columbus, sons: Bryan (Megan) Koliha of Schuyler, Dave Koliha of Howells, mother Val (Paul) Pekarek of Howells, brother Rod (Regina) Dirkschneider of Howells, sisters: Sandy (Paul) Muhle of Columbus, Lisa (Russ) Bayer of Clarkson, six grandchildren: Noah Salinas, Isaac Koliha, Reagan, Bella, Ava and Evan Koliha, special friend Pat, and nieces and nephews. She was preceded in death by her father, Robert in 1995 and brother, Jeff in 1985. Memorials are suggested to Family’s Choice to be designated at a later date.

The family of Donna M. Koliha created this Life Tributes page to make it easy to share your memories.

A Mass of Christian Burial for Donna M. Koliha, 56, of Howells...

Send flowers to the Koliha family.