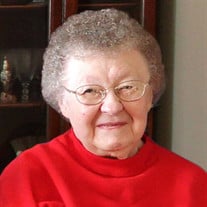 Donnette Jedlicka, 89, of Schuyler, passed away Tuesday, December 15, 2020 at David Place in David City. Memorials can be made in care of the family for future designation. A family Mass of Christian Burial will be said for Donnette at St. Mary’s Catholic Church in Schuyler with burial in the Schuyler Cemetery. Visitation, with no family present, will be held Sunday, December 20, from 2 until 4 p.m. at Svoboda Funeral Home-South Chapel. Svoboda Funeral Home is handling arrangements for the family. Donnette Rose was born in Colfax County on June 15, 1931 to Jerry F. and Rose (Loukota) Tuma. She went to grade school District 64, then three years to Schuyler High, graduating from Marietta High School-Bellwood in 1949. She lived on the farm with her parents until her marriage to Milo A. Jedlicka on September 12, 1950 at Presentation Church-Marietta-Bellwood. She enjoyed gardening, especially flowers and houseplants. She also liked to bake, embroider and quilt. Making quilts for all of her children and grandchildren, with pillows to match. Donnette liked doing word search puzzles and loved to read. Donnette also belonged to the Catholic Workman Branch 40 of Wilson. She is survived by her son Milo J, daughters JoAnn (Jim) Ogier, Shirley (Tim) Vrana, and sons Melvin (Kris) and Daniel A. Jedlicka; grandchildren: Andrew (Danielle) Jedlicka, Megan (Jordan) Jisa, and Shawn Vrana; step-grandchildren Ellery Zepeda, A.J. (Victoria) Zepeda, and step-great-granddaughters Josie Brichacek and Mia Grace Zepeda; brothers: Gerald (Bernie) Tuma and Ron (Rita) Tuma; niece Renee (Dominic) Warrino and nephew Don (Kathy) Tuma and her adoptive brother Bill (Betty) Kozisek. Donnette is preceded in death by her husband Milo in 2013, parents, brother Dennis in 1994, nephew Gerald Anthony Tuma in 1979, and step granddaughter Alexus Zepeda in 2017.

Donnette Jedlicka, 89, of Schuyler, passed away Tuesday, December 15, 2020 at David Place in David City. Memorials can be made in care of the family for future designation. A family Mass of Christian Burial will be said for Donnette at St.... View Obituary & Service Information

The family of Donnette Jedlicka created this Life Tributes page to make it easy to share your memories.