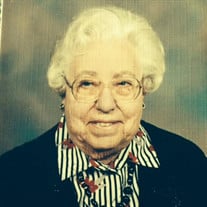 Funeral service for Dorothy Travnicek, age 101 formerly of Clarkson, will be held on Wednesday, October 12th, 10:30am at the New Zion Presbyterian Church in Clarkson. Visitation will be held at the church on Tuesday October 11th from 4 PM to 7 PM. Burial will take place at 2 PM Wednesday at the Stanton Cemetery. Dorothy died September 26, 2016 at the Parkview Home in Dodge where she had been a resident since 2010. Dorothy Margaret Fechner Travnicek was born November 15, 1914 to Gus and Martha (Hilliges) Fechner in rural Stanton County, Nebraska. She went to grade school in rural Stanton County and graduated from Stanton High School in 1933. She attended Wayne State College in Wayne, Nebraska and received a rural teaching certificate. She taught 8 years in several Stanton County rural grade schools. She had many fond memories of those students and years in the classroom. She married Joe W. Travnicek on May 29, 1944 and traded her teaching skills for homemaking and farm wife skills. Dorothy and Joe lived on a farm northwest of Clarkson for 50 years. While living on the farm she raised chickens and sold fryers and eggs to customers as far away as Omaha. She belonged to several extension clubs, one of which she was a charter member. She also led 4-H groups and was a charter member of the Clarkson FHA Chapter She was a 62 year member of the New Zion Presbyterian Church (and was its oldest living member) and she was active in the UPW (United Presbyterian Women) for many years. She also taught Sunday and Bible school. Dorothy enjoyed playing cards, crocheting, pen-pals (she had over 55), reading and writing. She was a 40 year correspondent for the Norfolk, Schuyler and Clarkson papers and loved to do feature stories about people and their hobbies, accomplishments or vocations. Dorothy was also a volunteer and board member of the Clarkson Museum. She baby sat for various families in the Clarkson area and drove many of her “younger” friends to out of town doctor appointments. She and Joe belonged to the “Night Cap” call in radio program that allowed them to visit with friends and neighbors over the air waves. In retirement years, she and husband Joe journeyed with friends all over the US on farm bus tours enjoying traveling without having to drive. Dorothy is survived by daughters; Judy (Gene) Wolff of Howells, Nebraska and Joyce (Jim) Kennedy of Riverton, Wyoming; five grandchildren; 13 great-grandchildren She is preceded by her husband, Joe (10/12/1994); infant son James (10/1/1946); sister Gertie Luxa. Family suggest memorials to New Zion Presbyterian Church, Clarkson Museum or AseraCare Hospice Team. Funeral lunch will be served in the church fellowship hall immediately following the funeral service.

Funeral service for Dorothy Travnicek, age 101 formerly of Clarkson, will be held on Wednesday, October 12th, 10:30am at the New Zion Presbyterian Church in Clarkson. Visitation will be held at the church on Tuesday October 11th from 4 PM... View Obituary & Service Information

The family of Dorothy Travnicek created this Life Tributes page to make it easy to share your memories.

Send flowers to the Travnicek family.