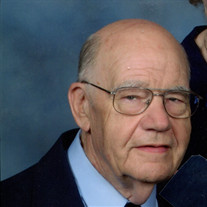 A Funeral Mass for 89 year old Edward F. Wolff, of Dodge, formerly of Howells will be held at 10:30 A.M. Friday, February 13th at S.S. Peter & Paul Catholic Church in Howells with Fr. Leo Rigatuso, Celebrant. Visitation will be held on Thursday from 2:30 P.M. until 7:30 P.M. at S.S. Peter & Paul Church with a Parish Rosary at 3:00 P.M. and a Knights of Columbus Rosary at 7:30 P.M. Visitation will continue on Friday, one hour before services at the church. Burial will be in S.S. Peter & Paul Cemetery. Ed passed away Tuesday, February 10th at Parkview Home in Dodge. Ed was born on January 13, 1926 in O’Neil, Nebraska, to Theodore and Elizabeth (Bose) Wolff. He graduated from Howell’ High School in 1945. Ed served in the U.S. Army from April 30, 1951 until April 7, 1953, stationed in Germany. On October 4, 1951, Ed married Rose M. Schlautman at S.S. Peter & Paul Catholic Church in Howells. After completion of his military duty, Ed attended the Barber College of Omaha and owned barbershops in Dodge and Howells, before retiring in 2011 after cutting hair for over 55 years. Ed was a member of S.S. Peter & Paul Catholic Church. He served as an officer in the Knights of Columbus, the American Legion, and the Howells Community Club, and was a retired member of the Howells Volunteer Fire Department. Ed loved ballroom dancing, gardening, and spending time with his grandkids. Ed is survived by his daughter Lou Anne (Tom) Eller of David City, grandchildren: Kristin (Justin) Lovitt of Howells, Thomas J. Eller of Columbus, Brandon Eller of Omaha, Justin Eller of Omaha, and Jeffrey Eller of Columbus. He is also survived by many nieces and nephews. He was preceded in death by his parents, wife Rose in 2013, brothers: Ted Wolff, Joe Wolff, John Wolff and Anthony Wolff and sisters: Laura Ridder and Elizabeth Ridder. Memorials are suggested to Howells Community Catholic Schools, the Howells Ballroom or the Howells Volunteer Fire Department.

The family of Edward F. Wolff created this Life Tributes page to make it easy to share your memories.

Send flowers to the Wolff family.