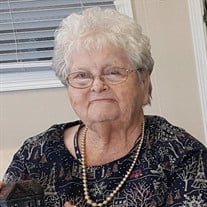 Elsie Bayer, 94, of Howells passed away Friday, December 20, 2019 at the Columbus Community Hospital. Memorials can be directed towards the Howells Community Fund or the Howells Community Catholic School. Elsie Delores Bayer was born on July 8, 1925 near Leigh to John and Lydia (Sayer) Specht. Elsie married Ralph Bayer on February 4, 1947 at S.S. Peter and Paul Catholic Church. Elsie enjoyed life on the farm, and took her duties to heart, and loved her family above all else. She loved being in the kitchen, cooking and baking (her favorites being bread and kolaches) for her family after a hard day’s work. She tended to her large garden every summer and every harvest began canning her crops. She always looked forward to winter, which was family butchering time, as she loved being the “official” meat wrapper. After Elsie moved to Cottonwood Place in Columbus it was a chance for her to make all new friends, whom she treasured dearly. While at Cottonwood she loved chatting with her new friends, playing cards, and bingo, she even joined their bell choir. In her younger years, Elsie was avidly involved with the Christian Mothers, played in the Pinochle Club, and was also a member of the Birthday Club. Elsie is survived by her children: Robert (Carol) Bayer of Howells, Connie (Brian) Bean of Joplin, MO, Marilyn (Mike) Kluthe of North Platte, NE, and Donna (Sam) Christensen of Columbus, 15 grandchildren and 22 great-grandchildren. She is preceded in death by her parents, husband Ralph in 2003, son Daniel in 1992; brother Ralph (Blanche) Specht; and sister Pearl (Albert) Vasina.

The family of Elsie D. Bayer created this Life Tributes page to make it easy to share your memories.