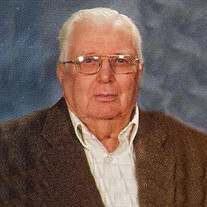 Emil "Tom" Horak, 92 of Schuyler, passed away on Friday, July 23, at St. Joseph's Villa in David City. Memorials can be directed towards Family Wishes for later designation. Funeral Services will be held at 10:30 on Thursday, July 29 at 10:30 a.m. at the First Presbyterian Church in Schuyler, with Rev. Sarah Gengler officiating. Visitation will take place Thursday from 9 until 10:30 at the church. Interment with military honors will be at the Schuyler Cemetery with lunch following in the church fellowship hall. Emil Thomas Horak was born on January 24, 1929 on the family farm near Howells to Emil and Lillian (Novotny) Horak. He graduated from Schuyler Central High School in 1946 and in 1949 enlisted in the United States Air Force. One month after being honorably discharged from the Air Force, Tom married the love of his life, Mary Marie Tyler on May 12, 1950 in Burkburnett, Texas and one child was born to this union. Upon returning from his deployment with his new bride, Tom farmed alongside his father Emil until the decision was made to sell the farm. Tom then worked for the Herb Gaeth Hatchery in Schuyler until he purchased the Sinclair filling station. After selling the filling station Tom began working at the local post office and worked his way up to a rural mail carrier, where he later retired from. Tom was members of the Bethlehem Chapel while living in the country, and upon moving to town joined the First Presbyterian Church. Tom served on the Presbyterian’s session and held every position possible, and always looked forward to singing as a baritone with the Sunday Choir. He enjoyed getting together with friends to play a game or two of taroks, canasta, or cribbage. In his down time Tom loved bowling, completing word searches, and solving math problems and most recently, playing bingo at the Villa in David City. Tom will forever be remembered by his family by his dedication to being an early bird to events, sometimes even two hours early. Tom is survived by his daughter, Ann (Larry) Sabata of David City, 2 grandchildren: Cori (Joe) Sullivan and their children, Clare and Joe Sullivan of Broomfield, CO, and Kevin (Lisa) Sabata and their son, August Sabata of Colorado Springs, CO; and several nieces and nephews. He is preceded in death by his parents, wife of 70 years Mary Marie Horak on October 16, 2020, and sister Eleanor (John) Budin.

Emil "Tom" Horak, 92 of Schuyler, passed away on Friday, July 23, at St. Joseph's Villa in David City. Memorials can be directed towards Family Wishes for later designation. Funeral Services will be held at 10:30 on Thursday, July 29 at 10:30... View Obituary & Service Information

The family of Emil "Tom" Horak created this Life Tributes page to make it easy to share your memories.

Emil &quot;Tom&quot; Horak, 92 of Schuyler, passed away on Friday, July...

Send flowers to the Horak family.