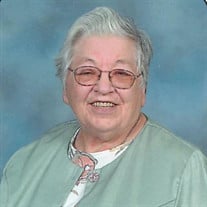 Emily T. Knapp, 94, of Schuyler passed away on Friday, November 26, 2021 at David Place in David City. Emily’s daughter Betty Henggeler joined her in death on Saturday, December 11, 2021 after a long battle with the COVID-19 Virus. Memorials can be directed towards the Schuyler Volunteer Fire and Rescue Department. Emily has been cremated and due to her daughter Betty’s battle with COVID, Emily’s family encourages everyone in attendance for the visitation and the mass please wear a face mask to help limit the spread of COVID-19. A Memorial Mass of Christian Burial for Betty Henggeler and Emily Knapp will be held at 10:30 on Friday, December 17, 2021 at St. Mary’s Catholic Church in Schuyler with Fr. Gerry Gonderinger officiating. Family greeting friends will take place Thursday, from 5 until 7 p.m. with a parish rosary recited at 7 p.m. Lunch will follow mass at St. Mary’s Social Hall and burial of ashes will take place at 2 p.m. Friday at Holy Cross Cemetery. Svoboda Funeral Home is handling arrangements for the family. Mass will be live streamed to the Svoboda Funeral Home Facebook page beginning 10 minutes prior to service. www.facebook.com/SvobodaFH/ Emily T. Juva was born on March 8, 1927 on the family farm near Clarkson, Nebraska to Frank and Tillie (Molacek) Juva. Emily attended rural schools through 8th grade until she was needed at home to help on the farm. She married Lumir Houdek and five children were born to this union. Lumir later passed away as the result of an automobile accident in 1959. Emily later married Steve Knapp on January 21, 1974 at St. Mary’s Catholic Church in Schuyler. Emily worked hard raising her five children especially after the loss of her first husband and worked to always provide for them. Emily loved her children and especially spending time with her grandchildren and great-grandchildren. She enjoyed spending time at the Colfax Senior Center (particularly playing bingo), listening to polka music, playing rummy, tuning in to watch Wheel of Fortune and she always looked forward to daily family updates from her check-in phone calls with her children. Emily could always be found with an infectious smile on her face and will always be remembered for lighting up any room. Emily is survived by her children: Dennis (Dorothy) Houdek of Lincoln; Donald Houdek of Schuyler; and Janet (Earl) Koch of Norfolk; son-in-law Ronald Henggeler of Schuyler, 15 grandchildren and many great-grandchildren and great-great-grandchildren. She is preceded in death by parents, first husband Lumir in 1959, second husband Steve in 1986, daughters Arlene Houdek and Betty Henggeler (December 11, 2021) and great-grandson Carson Schuster.

Emily T. Knapp, 94, of Schuyler passed away on Friday, November 26, 2021 at David Place in David City. Emily&#8217;s daughter Betty Henggeler joined her in death on Saturday, December 11, 2021 after a long battle with the COVID-19 Virus. Memorials... View Obituary & Service Information

The family of Emily T. Knapp created this Life Tributes page to make it easy to share your memories.

Emily T. Knapp, 94, of Schuyler passed away on Friday, November...

Send flowers to the Knapp family.