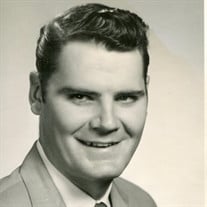 Eugene Alexander, 82, of Omaha, died Monday, June 27 at Life Care Center of Elkhorn. Memorials: Family Wishes Eugene "Gene" Alexander was born on March 4, 1934 to Worthy and Maxine(Bray)Alexander at Nebraska City. Gene married Elsie Hejhal on January 26, 1957 at St. Peter's Catholic Church in Omaha. Three children were born to this union. After an honorable discharge from the US Army, Gene went on to school and became a state licensed barber. In 1964, he bought his own shop in the Omaha metro where he practiced his trade for over 30 years. Gene enjoyed hunting, and in his younger days he would come back to the Howells and Schuyler areas to hunt with friends and family members. He was also an avid fisherman, spending many days on the local lakes and rivers. His passion was flying small aircraft. He piloted Pipers, Cessnas and other small aircraft for many years, and when his health no longer allowed him to physically fly, he turned to crafting and building radio controlled flyers. He was a member of the Omahawks Radio Control Club for over 20 years. Gene is survived by his wife, Elsie, Daughter: Donna(Tony)Brown of Omaha, Sons: Michael(Sarah)Alexander of Council Bluffs, Iowa and Scott(Teresa)Alexander of Elkhorn. Two sisters, Delorise Cox of Papillion and Mary Kay Alexander of Nebraska City. Four Grandchildren, Ryan Everson, Nathan, Olivia and Dalton Alexander. He was preceded in death by his parents, his step-father, Ernest Buchholz, two sisters, Earlene Stoll and Luanna Childers, and numerous nieces and nephews.

The family of Eugene "Gene" Alexander created this Life Tributes page to make it easy to share your memories.

Send flowers to the Alexander family.