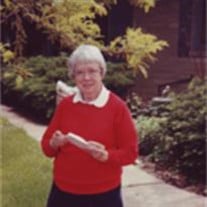 Eunice Beran, age 92 of Schuyler, died January 10, 2012 at the home of her sister, Mildred Metzger, in Camino Island, WA. Pastor Laura Hollister will officiate at the 2 PM memorial service at the First Presbyterian Church in Schuyler on Friday, January 20th. Music will be furnished by Jean Spilher, soloist, and Scott Spilher, organist. Private burial will be held at the Bohemian National Cemetery south of Clarkson. Eunice was born February 28, 1919 near Leigh, NE to Rudolph and Mary (Gigan) Jenny. After graduating from Leigh High School she taught school for tow years. Thereafter she attended the University of Nebraska, graduating in 1942 with a degree in Home Economics, Food and Nutrition. During W.W.II she was a Radio Code instructor at the Army Air Corp. Base in Sioux Falls, SD. From 1944 to 1946 she worked for Omar Bakery in Indianapolis, IN as Mary Baker ( like Betty Crocker of General Mills). In 1946 she returned to Nebraska to help care for her father and eventually they both moved to Portland, OR. There she taught Home Economics and completed her residency as a dietitian and then worked for a clinic as a dietitian. She was united in marriage to William Beran on June 17, 1951 and in 1963 they returned to the Beran farm Colfax County. Eunice became active in the community - teaching Sunday School at Bethlehem Chapel (south of Howells), and joined an Extension Club which lead to her becoming Chairperson of the Colfax County Extension Clubs. While serving as chairperson she accepted the position of facilitator for a new government program, the Expanded Food and Nutrition Program that was administered through the Extension Program. This program was designed to help lower income families learn better food and home management. She worked tirelessly in that capacity for the fourteen years the program was provided. She then went on to serve as dietitian for several nursing home in the area. In 1981 she was named dietitian of The Year" for the State of Nebraska. In 1983 Eunice and Bill moved to David City where she became very active as a volunteer. She raised money for the new David City Library building and in 1995 she received the Volunteer of The Year Award from the David City Chamber of Commerce. In 1998 Eunice moved to Schuyler and continued her volunteer work. She served as Treasure of the Schuyler Rotary Club for two years, volunteered as a Salvation Army Bell Ringer for many years, and was a member of the First Presbyterian Choir and served on the Board of Deacons of that church. Eunice was a member of the Trustees of the Schuyler Public Library, Schuyler Chamber of Commerce, Schuyler Hospital Auxiliary, Board of Directors of the Schuyler Historical Museum, Past President of P.E.O., Past President of General Federation of Women Club and Schuyler Rotary. In 2006 she received the "Service To Mankind Award" from the Schuyler Sertoma Club. Eunice is survived by her sisters, Mildred Metzger of Camino Island, WA and Ruth Copley of Albuquerque, NM; one brother-in-law: one sister-in-law; nieces and nephews and a host of friends. She is preceded in death by her parents; her husband William (12/29/1986); two sisters; three brothers. Family suggest memorial to the First Presbyterian Church, Schuyler Library Building Fund or the Schuyler Historical Museum. Funeral lunch will be srved in the Presbyterian Church Fellowship Hall immediately following the Memorial Serive. To leave a message for the family - at the top of this page click "Send Condolences" / fill in YOUR name and e-mail address / type in your message / click PRIVATE (type in code) or PUBLIC / click "Add Memorial entry".

Eunice Beran, age 92 of Schuyler, died January 10, 2012 at the home of her sister, Mildred Metzger, in Camino Island, WA. Pastor Laura Hollister will officiate at the 2 PM memorial service at the First Presbyterian Church in Schuyler on... View Obituary & Service Information

The family of Eunice Beran created this Life Tributes page to make it easy to share your memories.