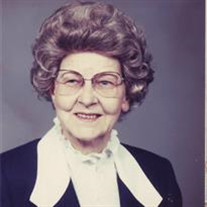 Fern was born July 17, 1925 in Creighton, NE to Lars and Signey (Martinson) Johnson. She received her education in the Creighton Public Schools and graduated in 1942. She taught rural school in Knox and Cedar Counties for four years before she married Eugene Brandl in May of 1946. Fern moved to Schuyler from Wausa in 1965. She worked at Dale Electronics in Columbus for many years and as a waitress and cook at the Western CafÃ© in Schuyler. She also worked as a domestic and a care giver. Fern was also a proof reader for the Schuyler Sun and an active volunteer in the community. Fern was the recipient of the Sertoma Service To Mankind Award in 2003. She enjoyed quilting, crossword puzzles, taking care of her plants and spending time with her family. Fern died November 2nd, at the age of 87, at her daughter, Sherri's, home in Paplillion where she had lived for the last 18 months. Fern is survived by seven children, Sherril (Jack) Mefford of Papillion, Robert (Connie) Brandl of Tribune, KS, Richard (Diane) Brandl of Schuyler, Raymond Brandl of Linwood, Russell (Lisa) Brandl of Omaha, Sally ( Ken) Hahn of Norfolk, Roland, (Linda) Brandl of Schuyler; daughter-in-law, Jean Brandl of North Platte; 23 grandchildrenâ€™ 25 great grandchildren. She is preceded in death by husband, Eugene; son Roger; 2 granddaughters, Stacie and Mary Ann Brandl; four sisters, Lily Olson, Linnea Pickett, Janet Dubsky and an infant sister; three brothers, Walter, Everett and Allen Johnson. The family requests memorials to Alegent Hospice. Funeral lunch will be served at St. Augustine's Parish Hall following the burial in the Schuyler Cemetery. To leave a message for the family - at the top of this page click "Send Condolences" / fill in YOUR name and e-mail address / type in your message / click PRIVATE (type in code) or PUBLIC / click "Add Memorial entry".

Fern was born July 17, 1925 in Creighton, NE to Lars and Signey (Martinson) Johnson. She received her education in the Creighton Public Schools and graduated in 1942. She taught rural school in Knox and Cedar Counties for four years before... View Obituary & Service Information

The family of Fern Brandl created this Life Tributes page to make it easy to share your memories.

Send flowers to the Brandl family.