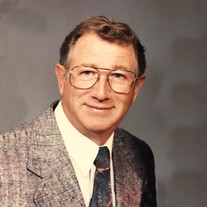 Francis Svoboda, 87, of Schuyler passed away Friday, December 18, 2020 at his home. Memorials can be directed towards the Benedictine Mission House. Mass of Christian Burial will be held on Wednesday, December 23, at 10 a.m. at St. Augustine Catholic Church in Schuyler, Fr. Gerry Gonderinger officiating. Visitation with no family present will be Tuesday from 4 until 6 p.m. at Svoboda Funeral Home-South Chapel. A parish rosary will be recited Wednesday at 9:30 at the church. Masks will be required for those attending the rosary and mass. Military rights will immediately follow mass. Interment will be at the Omaha National Cemetery at 1 p.m. Svoboda Funeral Home is in charge of the arrangements. Services will be live-streamed to the Svoboda Funeral Home Facebook page: www.facebook.com/SvobodaFH/ Francis was born in Schuyler on November 23, 1933 to Amos and Gertrude Svoboda. He retired as the publisher of the Schuyler Sun in 1999. He was a third-generation newspaper man. In 1955 following his graduation from the University of Nebraska Lincoln with a degree in journalism, he joined the United States Navy and served aboard the USS Lexington in the Pacific. During his 21 months in the service, he worked in the public information office aboard ship and was co-editor of the ship’s newspaper. Following his discharge from the service he joined the Schuyler Sun staff with his father and brother-in-law Francis Rea. In 1960, his sister Elizabeth arranged a blind date with Mary Pleiss. They were married in 1961 and blessed with six children. It was a great life with Mary and the children. He enjoyed his work at the Sun and the great people he worked with who were so much help. He was an avid outdoorsman. He enjoyed golf, hunting, and particularly fishing. Francis was a long-time member and sponsor of the Schuyler Ducks Unlimited branch. He is survived by his wife of almost 60 years, Mary, children: Christine Svoboda (Joseph Worthing) Theresa (Timothy) Revoy, Terrence (Kurstin) Svoboda, Kathleen Franco, John (Maria) Svoboda and Julianne (Jeff) Stedwill; 26 grandchildren and eight great grandchildren; sisters Margaret Reinecke and Elizabeth Svoboda; brother-in-law Glenn Barry and many nieces and nephews. Francis is preceded in death by his parents, brother Amos Jr., sister Mary Alice (Francis) Rea, sisters Sally Barry and Suzanne Svoboda, and brother-in-law John Reinecke.

Francis Svoboda, 87, of Schuyler passed away Friday, December 18, 2020 at his home. Memorials can be directed towards the Benedictine Mission House. Mass of Christian Burial will be held on Wednesday, December 23, at 10 a.m. at St. Augustine... View Obituary & Service Information

The family of Francis C. Svoboda created this Life Tributes page to make it easy to share your memories.

Send flowers to the Svoboda family.