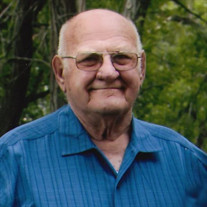 Frank R. “Butch” Jedlicka, 79, passed away Sunday, February 2, 2020 at Tabitha House in Lincoln. Memorials can be directed towards ARC of Colfax County or Divine Mercy Parish. Frank R. “Butch” Jedlicka was born on January 11, 1941 in Colfax County to Frank E. and Adela (Svec) Jedlicka. He graduated from Schuyler High School in 1958 and went on to join the United States Army Reserve until his honorable discharge in 1966. In 1972, he married Dorothy M. Sedlak, of the Wilson community. Their families spent many years as friends and neighbors. Butch spent his life working the family farm alongside his father until F.E.’s death. He then continued to work the land that he loved until retiring in 2003. Thereafter, he stayed involved with the farm, purchasing a grain truck, hauling grain and working at Schuyler Co-op until his health no longer allowed him to. Aside from his love for farming, he also loved socializing with others. He could be found many an early morning having coffee and a game of cards with friends. He was known for his faith in God and his love for Ford vehicles and International machinery. In his younger years, he enjoyed racing stock cars. Butch donated a lot of time to the ARC of Colfax County, as an officer and member of the group that proved aide and support to his daughter Becky throughout her life. He served on the Schuyler Co-op Board, was a lifetime member of the Knights of Columbus, and belonged to Divine Mercy- St. Mary’s parish. He was a consistent blood donor at each local Red Cross blood drive. He had a way of making others smile with his witty sense of humor and for that we will miss him deeply. He is survived by his wife of 47 years Dorothy, of Lincoln and their daughter Kathleen (Ryan) Kohler of Roca, NE; daughters Joan Menard of Fremont, Colleen Jedlicka of Texas, and Barbara Jedlicka of Stanton; sister Catherine Novacek of Schuyler; grandchildren: Grace, Ally, and Olivia Kohler, Sarah Kinney, Chris Kinney, Katie (John) Watton, Tiffany (Anthony) Patten; great-grandchildren Isabella, Eli, and Alex Watton. Butch is preceded in death by his parents, daughter Rebecca Jedlicka in 2003, son-in-law Brad Menard and brother-in-law Elmer Novacek.

The family of Frank R. "Butch" Jedlicka created this Life Tributes page to make it easy to share your memories.