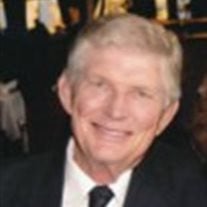 71 year old Fred Krenk died December 21st at the Butler County Hospital. Fred was born February 8, 1942 in Schuyler to Evelyn (Metalak) and Edward Krenk II. He lived in Osceola until 1949. After the death of his father the family moved to Schuyler Fred was an Eagle Scout. He was awarded the Silver and Gold Palm, Order of Arrow and the God and Country Award. Fred graduated from Schuyler High School in 1959 and from Nebraska Vocational Tech School in Milford in 1961 having completed his studies in Auto Mechanics. After gaduation he worked as an auto tech in Crete, then joined Wigington Chevrolet in Schuyler as an auto tech and service manager. Fred married Alice Hejhal at Holy Trinity Catholic Church at Heun on January 4, 1964 and they made their home in Schuyler. He also had worked for Hamata Brothers and cu t trees with Bayer & Krenk Tree Service before starting Fred’s Super Service in 1978. Alice and the girls pumped gas and ran the bait shop, but Fred changed the name to Krenk Auto Repair because he said the pressure of living up to the “Super” name was too much, so they decided to get out of the gas business. Fred served on the St. Mary’s Parish Council, was a member of the Knights of Columbus, served as an Acolyte and Eucharistic Minister for Divine Mercy Parish. His family was his pride and joy. He loved and lived life to the fullest and enjoyed many adventures with his family including boating, water skiing, snow skiing, camping, biking, roller blading and family volleyball games. He also enjoyed hunting in his earlier years. He had many home projects and enjoyed carpentry, gardening and especially planting trees. He was a Jack of All Trades and enjoyed helping others. He was very strong in his faith and always tried to put God and family first. Fred is survived by his wife, Alice, of Schuyler; four daughters, Kristine (Lynn) Schmale of Carmel, Indiana, Cindy (Reno) Judds-Krenk of Fremont, Justine (Shane) Stouffer of David City and Heather (Joe) Kasik of Leigh; 19 grandchildren; 5 great grandchildren; brother, Edward Krenk III and his wife Sharon of Elkhorn. He is preceded in death by his parents. Family suggest memorials to Masses or Family Wishes Funeral lunch will be served at St. Mary's Social Center following burial in the Schuyler Cemetery.

71 year old Fred Krenk died December 21st at the Butler County Hospital. Fred was born February 8, 1942 in Schuyler to Evelyn (Metalak) and Edward Krenk II. He lived in Osceola until 1949. After the death of his father the family moved to... View Obituary & Service Information

The family of Fred Krenk created this Life Tributes page to make it easy to share your memories.

Send flowers to the Krenk family.