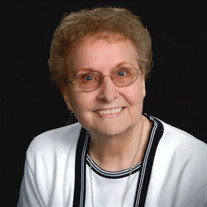 Geneva "Jean" Mousel, 84, of Schuyler, passed away at her home in Schuyler on Wednesday, October 16, 2019. Memorials can be directed towards Family Wishes. Geneva Emma Mousel was born on February 3, 1935 in Howells, Nebraska to Lada and Louise (Belina) Cech. She received her schooling from Rural School District 50. On February 25, 1957 Geneva married Stanley Slegl in Fremont, and later had another ceremony at St. Mary’s Catholic Church in Schuyler. Stanley passed away on June 26, 1988 from cancer. Geneva later met Wilbur Mousel and the couple were married on May 1, 1992 at St. Mary’s in Schuyler. In her earlier years Geneva waitressed at the Arrow Inn Café and the Western Café, but was most known for her in-house daycare that she operated for over 25 years. She was an active member at St. Mary’s church with the ladies guild, the Eagles Club, VFW, and the Legion Auxiliary. Geneva enjoyed spending time working on craft projects and tending to her flowers. She also collected Beanie Babies and porcelain dolls, and enjoyed traveling with her husband, Wilbur (Swede). Geneva is survived by her husband Wilbur of Schuyler; three children: Sandra Conrad of Columbus, Michael (Mindy) Slegl of Columbus, and Sheila (Quinn) Kluck of Richland; three step-children: Ira Mousel of Schuyler, Kristie (Mark) Palik of David City, and Pam Bourn of Schuyler; sister-in-law Joan Cech; 17 grandchildren; 16 great-grandchildren and many nieces and nephews. She is preceded in death by her parents; first husband Stanley in 1988; four brothers: Vernon (Marlene) Cech, Ervin (Audrey) Cech, Marvin Cech, and Melvin Cech; sister Laverna Fiala; step-son Rick Mousel, and two nephews.

Geneva "Jean" Mousel, 84, of Schuyler, passed away at her home in Schuyler on Wednesday, October 16, 2019. Memorials can be directed towards Family Wishes. Geneva Emma Mousel was born on February 3, 1935 in Howells, Nebraska to Lada and Louise... View Obituary & Service Information

The family of Geneva "Jean" E. Mousel created this Life Tributes page to make it easy to share your memories.

Geneva &quot;Jean&quot; Mousel, 84, of Schuyler, passed away at her home...

Send flowers to the Mousel family.