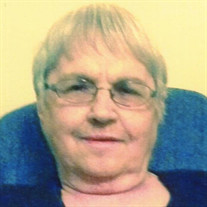 Georgiann Jedlicka, 72, of Columbus, passed away Sunday, January 22, 2017 at Columbus Care and Rehab. MEMORIALS: FAMILY WISHES Georgiann was born on March 4, 1944, on a farm near Schuyler, NE to Adolph and Georgia (Nemec) Buresh. Georgiann's family moved to a farm near North Bend where she attended high school. She met Frank D. Jedlicka at a dance in Schuyler and the two were married on July 23, 1960. They lived in North Bend. where three children were born to this union. They moved their family to Schuyler in 1969. Georgiann was a life long member of St. Mary's Catholic Church, Schuyler. She was a brownie troop leader for her daughter, Suzanne. Her and Frank were avid dancers and they attended many dances throughout the years. They also appeared on the televised Big Joe Polka Show. Georgiann enjoyed playing cards on Saturday nights with friends in a Canasta card club. She liked going to the casinos and she enjoyed spending time with her grandsons, Nicholas and Nathan Stevenson. She also enjoyed taking trips with her husband to Colorado to see her son's family. Georgiann had many jobs. She worked at the Schuyler Nursing Home. She then opened a daycare in her home where she helped raise many children. During the daycare years, she and a neighbor took classes to get their GED's, of which she was very proud. She closed the daycare and was a pizza maker at Casey's in Schuyler. She also worked at the Eye Doctor's office in Schuyler and finally as a Kindergarten para educator at Schuyler Community Schools, retiring from there in August of 2008. She moved to Prairie Village Assisted Living in Columbus in September of 2010. She later had more health issues and moved to Columbus Care and Rehab in April of 2014. Georgiann is survived by her daughter, Suzanne(Dan) Stevenson, Son-in-law: David Pokorny of Lincoln, Daughter-in-law, Renee Jedlicka of Loveland, CO, 3 grandchildren: Nicholas and Nathan Stevenson and Taylore Jedlicka. Sisters, Maxine (Leonard) Babcock of Racine, MN and Jo Ann (Ross)Rohde of Fremont, and several nieces and nephews. She was preceded in death by her parents, her huband, Frank in 2006, daughter, Shelley Pokorny in 2013 and son, Scott Jedlicka in 2016. Three brothers: Dennis, Adolph and Larry Buresh and two sisters: Linda Porter and Cyndi Buresh.

The family of Georgiann Jedlicka created this Life Tributes page to make it easy to share your memories.