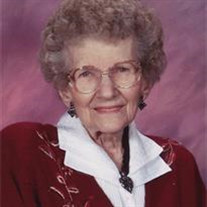 Gladys was born on August 13th, 1923, to Emil and Josephine (Hampl) Prusa in Howells, Nebraska. She attended grade school at District 32 in rural Colfax County, and then graduated from Howells High School in 1940. She received her Normal Training Certificate in May of 1944, and she taught at District 32 for two years. In fact her contract stated she made $85.00 per month. She married the love of her life, William Krula, on June 18th, 1946. She and William moved onto their home place the following year. They lived and farmed for 66 years. Together they raised a lot of livestock, grain and children.To this union they were blessed with 9 children; Bonita Faye, Duane William, Colleen Edith, Arlette Gail, Ellen Marie, Florence Ann, Gary Joseph, Howard Dale and Ivan Kendall. Gladys' passion was her love of music. She enjoyed playing for church and other special occasions. She also gave many piano lessons. In fact, this love of music, she instilled in her grandson, Joseph. There are many people who can play an instrument, but only a few can make music come alive. We believe this was a ministry in which, was as natural to her as breathing. She was still able to play until last month. Gladys also served on many church committees, she served on the Farm Bureau Board and worked on the Schuyler Blood drives. As children we take for granted the unconditional love and many sacrifices a mother makes. Mom did a lot of hard work raising us 9 kids. All the meals, mountains of laundry and her delicious bakery will be a treasured memory. She also instilled in us a foundation in Christian beliefs. Gladys was proceeded in death by her parents, Emil and Josephine, an infant sister, Leona, her husband, William and grandson William. She is survived by, Bonita Krula Zelman and Marvin, of Hartford, Conneticut. Duane and Cathleen Castellot Krula of Pagosa Springs, Colorado Colleen and David Anderson of Raleigh, North Carolina Arlette and Don Kroupa of Omaha, Nebraska Ellen and Bob Misek of Marquette, Nebraska Florence Krula of Omaha, Nebraska Gary and Carla Krula of Rogers, Nebraska Howard and Susan Krula of Bellevue, Nebraska Ivan and Susanne Krula of Rogers, Nebraska A brother, Melvin Prusa, of Howells, Nebraska 16 Grandchildren, 1 Step-grandchild, 10 Great-Grandchildren and 2 Step Great-grandchildren. Gladys will be laid to rest at Purple Cane Cemetery, of rural Dodge County. Memorials can be made to: The Presbyterian Church Schuyler Blood Mobile Schuyler Historical Society Funeral lunch will be served in the Fellowship Hall immdiately following the funeral service.

Gladys was born on August 13th, 1923, to Emil and Josephine (Hampl) Prusa in Howells, Nebraska. She attended grade school at District 32 in rural Colfax County, and then graduated from Howells High School in 1940. She received her Normal... View Obituary & Service Information

The family of Gladys Krula created this Life Tributes page to make it easy to share your memories.

Send flowers to the Krula family.