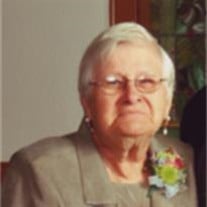 Goldie was born February 14, 1923 in Fremont to Frank and Edna (Diaz) Manzel. She graduated from Fremont High School in 1942. On February 5, 1945 she married Leonard Palensky at St. Peter and Paul Catholic Church in Abie and they lived in the Abie area for many years. Over the years she worked at Woolworth's Dime Store in Fremont, Campbell's Soup Plant in Fremont, the Onion Plant in Wahoo, Dekalub (as a strawboss for detaselling), cleanup crew at the Packing Plant in Schuyler, Northside Cafe in David City. and other odd jobs. Goldie was a member of the Heritage Club in David City and sang in their choir. She was also a member of the Red Hat Society and the Assumption Altar Society. She enjoyed crocheting, sewing, baking, dancing, watching her grandchildren's sporting events and All Star Wrestling. Goldie died September 22nd at the Butler County Hospital at the age of 87. Goldie is survived by her husband, Leonard of David City; nine children, Connie (Mrs. Duane) Svoboda of David City, Judy (Mrs. Jerome) Jakub of Columbus, Leonard Jr. (Loretta) of David City, Julie Chmelka of David City, Ron (Tracy) of Linwood, Tim (Lisa) of Columbus, Tammy Ehrich of Fremont, Carman Jorgensen of David City and Pete (Re'Nee) of Schuyler; 28 grandchildren; 21 great grandchildren; brother, Hamilton (Karen) Manzel of Sonoma, CA.; brother-in-law, Gordon Reier of Fremont; sister-in-law, Marge Manzel of Fremont. She is preceded in death by one granddaughter, Renee Palensky; brothers, Marvin and Jack Manzel; sisters, Mern Pfieffer, Nona Babe and Dorothy Reier. Burial will be inthe Assumption Cemetery at Appleton. Funeral dinner will be served a the Knights of Columbus Hall in David City. Family suggest memorial to Family Choice. To leave a message for the family - at the top of this page click "Send Condolences" / fill in YOUR name and e-mail address / type in your message / click PRIVATE (type in code) or PUBLIC / click "Add Memorial entry".

Goldie was born February 14, 1923 in Fremont to Frank and Edna (Diaz) Manzel. She graduated from Fremont High School in 1942. On February 5, 1945 she married Leonard Palensky at St. Peter and Paul Catholic Church in Abie and they lived in... View Obituary & Service Information

The family of Goldiemae Palensky created this Life Tributes page to make it easy to share your memories.

Send flowers to the Palensky family.