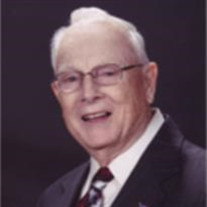 Gus was born July 26, 1924 in Clarkson to Gustav Bohuslav (which means Lover of God) and Pauline (Zrust) Fayman. He graduated from Clarkson High School in 1942. Gus played lead saxophone in the Duffy Belorad Band before being drafted (Cleo took over his spot in the band). He served in the Army (May 7, 1943 to November 11, 1944) and Army Air Corps (November 11, 1944 to October 31, 1945) and the Air Force Reserve Selective Service for another 22 years, retiring in 1972 at the rank of Major. He married Cleo Karel on May 25, 1946 and before long they moved to Chicago for two years so Gus could take training for Piano Tuning and Technology. Gus worked at First National Bank in Schuyler for 27 years and held the office of Executive Vice President when he retired in 1984. Gus played saxophone in many area dance bands and was a professional piano tuner. Gus was a member of the American Legion, 40 & 8, Rotary, and had Been awarded the status of Life Member of the Schuyler Chamber of Commerce. He had served on the Schuyler School Board, the Schuyler Memorial Hospital Board and the Board of Directors of the Prairie Hills Girl Schout Council. Gus was a people person and enjoyed encouraging people whot were trying to better themselves. Gus died July 19th at the Golden Living Center in Schuyler. He is survived by his wife, Cleo of Schuyler and three children, Lynn Marie Podany of Nashville, TN, Diane Jean Fayman of Omaha and Roger Alan Fayman of Schuyler. Three grandchildren, Lara Podany-Sherrill, Ryan Podany and Lisa (Podany) Wright. Five great grandchildren, Anna Sherrill, Taylor Podany, Ashlee Podany, Whitney Podany and Alyssa Podany. One sister Arlene Odvarka of Lincoln. He is preceded in death by his parent, one brother, Art Fayman and one son-in-law, Ron Podany. Family suggest memorial to First Presbyterian Church, Schuyler Senior Center or lzheimer's Association. Fellowship coffee will be served at the Presbyterian Church Fellowship Hall following the committal service at the Schuyler Cemetery with Military Honors by McLeod Post # 47 of the Americn Legion and Hespen-Mittchel Post 4836 of the V.F.W.. To leave a message for the family - at the top of this page click "Send Condolences" / fill in YOUR name and e-mail address / type in your message / click PRIVATE (type in code) or PUBLIC / click "Add Memorial entry".

Gus was born July 26, 1924 in Clarkson to Gustav Bohuslav (which means Lover of God) and Pauline (Zrust) Fayman. He graduated from Clarkson High School in 1942. Gus played lead saxophone in the Duffy Belorad Band before being drafted (Cleo took... View Obituary & Service Information

The family of Gus Fayman created this Life Tributes page to make it easy to share your memories.

Send flowers to the Fayman family.