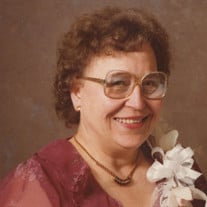 Helen Nadine Beran, 81 of rural Howells, passed away Sunday, June 21, 2015 at Parkview Home in Dodge. Mass of Christian Burial will be at 10:30 A.M. Thursday, June 25th at St. Mary's Catholic Church in Schuyler. Visitation will be Wednesday from 5:00 PM to 7:00 PM at the Svoboda Funeral Home North Chapel, with a rosary prayer service at 7:00 PM. Visitation will continue Thursday from 9:30 AM until 10:30 AM at St. Mary's Catholic Church. Burial will be in Midland Bohemian National Cemetery (Sousek Cemetery) in rural Clarkson. Nadine was born March 4, 1934 in rural Clarks, Nebraska to Edward and Helen (Mares) Cerny. She began school as a first grader at Clarks Rural District 43. Following the family's move to Colfax County, she attended District 7 and Schuyler High School (class of 1950). She attended the University of Nebraska-Lincoln for one year and then began teaching grade school in Colfax County. Nadine married Emil J. Beran, Jr. on May 19, 1953 at St. Mary's Catholic Church in Schuyler. As a child, Nadine was a member of St. Mary's Catholic Church in Schuyler. Upon her marriage, the couple joined St. Patrick's Dublin Catholic Church in rural Rogers, returning to St. Mary's when Dublin closed. She devoted many years to teaching Catechism, leading the choir and playing organ for both churches. She enjoyed participating in numerous Diocesan choirs and festivals through the years. She was a member of Maple Creek Extension Club and the Loup Valley Gem and Mineral Club. Nadine started and led the Guys and Gals 4-H Club and was an ardent member of the Schuyler Historical Society, serving as curator of the museum for over 15 years. She was proud that this position had previously been held by her mother. Nadine was an expert baker of delicious kolaches and cinnamon rolls as well as an avid jelly maker, using fruits she harvested herself. Together with her husband Emil, she sold these items along with a bounty of vegetables at farmer's markets in Lincoln, Schuyler and Columbus. In addition, she loved rock hounding, collecting, embroidery, crocheting and crafting of any sort. Nadine and Emil operated Doc's Rock Shop and attended many area craft shows with their woodworking, rock jewelry, craft and other creations. Many fishing trips to Minnesota lakes were enjoyed in their nearly 62 years together. They were proud to host large gatherings at the family farm and especially the musical traditions being carried on by her children and grandchildren. Nadine is survived by her children: Jan (Donna) of Lincoln, Kathy (Steve) Niedbalski of Kearney and twins Emil James of Omaha and Jean (Scott) Spilker of Beatrice; 14 grandchildren, Sarah (Chris) Short, Jan Michael (Heidi) Beran, Katlyn Beran, Stacy (Brendan) Cope, Theresa (Scott) Burdick, Katie (Cory) Clark, Paul Niedbalski, Phil (Dani) Niedbalski, Peter (Erin) Niedbalski, Rachel Niedbalski (fiance Andrew Syring), Rebecca Niedbalski, Anna (Brenton) Erikson, Nathan Spilker and John Spilker; 10 great-grandchildren, Savannah, Cole and Christian Short, Jackson and Cohen Beran, Madison, Jacob and Nicholas Burdick and Izabela and Aurora Clark; sisters Doris (Ronald) Mehaffey of North Bend, Gloria (Jack) Jonas of Fergus Falls, MN, and Mary (Tim) Preister of Golden, CO; sister-in-law Elsie Cerny, and numerous nieces and nephews. She was preceded in death by her husband Emil on March 17, 2015, her parents, brother Robert Cerny, and great-grandson Damien Joseph Clark. Memorials are suggested in care of the family.

The family of H. Nadine Beran created this Life Tributes page to make it easy to share your memories.