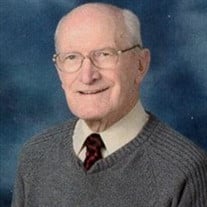 Harlan Aubrey Grier, 88, of Cedar Rapids, Iowa, formerly of Missoula, Montana, and Schuyler, Nebraska, died Saturday, December 8, 2018, at his home. Harlan was born June 12, 1930, in Schuyler, Nebraska, the son of Arthur A. Grier and Helen M. (Bailey) Grier. He was baptized at Christ United Methodist Church, Schuyler, and confirmed his Christian faith at First Lutheran Church, Omaha, Nebraska. Harlan received his elementary education at Colfax County District 43 one-room school. Following his 1946 graduation from Schuyler Central High School at age 15, Harlan and Judy farmed in Schuyler, Nebraska for many years. He served in the United States Air Force from 1951 to 1955. On April 28, 1957, Harlan married Judith M. Pflughoeft at First Lutheran Church in Omaha, Nebraska. To this union two children, Michael and Jo Anne, were born. Harlan and Judy farmed in Schuyler, Nebraska for many years. He was a member of Trinity Lutheran Church and the Lutheran Laymen’s League. Harlan and Judy moved to Missoula, Montana in 2000 to be near their daughter’s family and to enjoy their favorite vocation as loving grandparents. Harlan was a member of Messiah Lutheran Church in Missoula. In 2013, he moved to Cedar Rapids, Iowa and joined Trinity Lutheran Church. Until the Lord called him home to heaven, Harlan remained firm in his Christian faith as expressed in his confirmation verse from Romans 8:38-39: “For I am convinced that neither death nor life, neither angels nor demons, neither the present nor the future, nor any powers, neither height nor depth, nor anything else in all creation, will be able to separate us from the love of God that is in Christ Jesus our Lord.” Harlan was a member of the American Legion, Widows & Widowers group, and Trinity Lutheran Fellowship Club. His many interests over the years included painting, violin, science, reading, inventing, plays and concerts, and being an enthusiastic cheerleader for all his family’s endeavors. Harlan was preceded in death by his father in 1981; his brother, Arthur James Grier, in 1998; his mother, Helen Grier, in 1999; his wife, Judith Grier, in 2005; and his son, Michael Grier, in 2015. His surviving family includes daughter, Jo Anne Renfro, and husband, David, of Cedar Rapids; grandson, Jordan Renfro, of Delano, Minnesota; granddaughter, Bailey Renfro, of Cedar Rapids; and dear friend, Karen Flint, of Cedar Rapids. Visitation will be held 4:00-6:00 p.m. Thursday, December 13, 2018, at Murdoch-Linwood Funeral Home, Cedar Rapids. Funeral services will be held at 11:00 a.m. Friday, December 14, 2018, at Trinity Lutheran Church, 1363 1st Avenue SW, Cedar Rapids, with visitation one hour prior to service. The Rev. Dr. Brian Saunders will officiate. The Rev. David Renfro will conduct a graveside service at the Schuyler Cemetery in Nebraska on Saturday, December 15, 2018, at 3:30 p.m. Memorials may be directed to Trinity Lutheran Church and School, Cedar Rapids.

The family of Harlan Aubrey Grier created this Life Tributes page to make it easy to share your memories.

Send flowers to the Grier family.