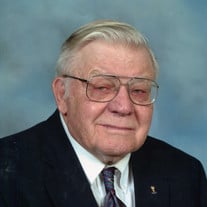 Mass of Christian Burial for Haold F. Sucha, age 95 of Schuyler, will be held at 10:00 A.M. on Monday, June 6th at St. Mary’s Catholic Church in Schuyler. Visitation will be held at the Svoboda Funeral Home North Chapel on Sunday from4 PM to 7 PM and on Monday from 9 AM to 9:45 AM. A combined parish and Knights of Columbus rosary will be recited at the North Chapel at 7 PM on Sunday. Burial will be in the Schuyler Cemetery with military honors. Harold was born July 25, 1920 in Stanton County, north of Leigh, to Henry and Agnes (Klimes) Sucha. He attended rural school in Stanton County and graduated from Leigh High School. Harold served in the Army during WW II and was stationed in central Europe. On September 24, 1946 he and Lavonne Hanel were married at St. Mary’s Catholic Church in Schuyler. Harold was a retired farmer and sub rural mail carrier. He was a 3rd and 4th Degree member in the Knights of Columbus and served as the Nebraska State Master of the 4th Degree. Harold died June 2, 2016 at Golden Living Center in Schuyler. "Harold was a WWII veteran, a farmer, a school board member, a 4-H leader, and pork producer.  He was a devout Catholic, always active in his parish, a member of the 3rd and 4th degree Knights of Columbus, the American Legion, and he was, of course, an avid Husker fan.  Most of all, he was a loving and devoted husband, father, son, brother, uncle, grandfather and great-grandfather - his family was everything to him.  God has called him to Himself now we rejoice through our tears for the man he was and that he now rests with the Lord.  Rest in peace, dad, we love you forever." Harold is survived by his son, Alan (Linda) Sucha of Schuyler. Three daughters, Vicki (Delbert) Herout, Renee (Don) Johns and Naomi Sucha all of Omaha; daughter-in-law, Judy Sucha of Schuyler; 11 grandchildren; 14 great grandchildren; brother, Dr. Merlin Sucha of Schuyler. He is preceded in death by his wife, Lavonne (12/13/1998); son, Dana Sucha (8/23/2011); grandson, Scott Sucha (1/28/1969); granddaughter, Joleen Herout (1/14/1977). Family suggest memorials to Schuyler Senior Center or Benedictine Mission Home. Funeral lunch will be served at the St. Mary's Social Center.

Mass of Christian Burial for Haold F. Sucha, age 95 of Schuyler, will be held at 10:00 A.M. on Monday, June 6th at St. Mary&#8217;s Catholic Church in Schuyler. Visitation will be held at the Svoboda Funeral Home North Chapel on Sunday from4... View Obituary & Service Information

The family of Harold F. Sucha created this Life Tributes page to make it easy to share your memories.