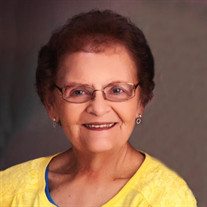 Irene Sobota, 81, of Schuyler passed away on April 12, 2021 at the St. Joseph’s Villa in David City. Memorials can be directed towards Family Wishes for later designation. Mass of Christian Burial for Irene will be held on Thursday, April 15, at 10:30 a.m. at Holy Trinity Catholic Church at Heun with Fr. Stan Schmit officiating. Visitation will be held Wednesday from 5 until 7 p.m. at Svoboda Funeral Home-North Chapel, with a parish and Knights of Columbus rosary recited at 7 p.m. Masks are encouraged for the visitation and Mass. Lunch will be served immediately following Mass in the church basement. Per Irene’s wishes, following Mass she will be cremated, and a private family burial in the Holy Trinity-Heun Cemetery will take place at a later date. Svoboda Funeral Home is handling arrangements for the family. Irene was born on May 13, 1939 in North Bend to Emil O. and Emily (Vyhlidal) Cihacek. After graduating high school, Irene attended St. Mary’s College to obtain her teaching certificate. While attending college she worked for Mutual of Omaha, then went on to teach school in Saunders, Dodge, and Colfax Counties. On June 27, 1961 at St. Charles Catholic Church in North Bend, Irene married Gene J. Sobota. Irene volunteered as the leader of the Jolly Jills 4-H Club for many years, helped at the Colfax County Fair for over 40 years, was a member of FCSLA of 40 years, and also was awarded the 50+ year pin for being an active member in the Heun Colfax County Extension. When she wasn’t busy helping at the fair or leading her 4-H group Irene could usually be found mowing the Heun parish grounds or helping with the Holy Trinity, Heun Ladies Guild and Altar Society and serving as a Eucharistic Minister, a duty she took great pride in. In 1982, following her husband Gene’s illness, Irene took over the family farming operations to keep the farm running. Irene was a great seamstress and enjoyed making gifts for all of her family members. She had a great love for country music and that love led Irene and Gene on several trips to Branson and Nashville. Irene loved helping her grandchildren with their 4-H projects and enjoyed the time they spent completing projects. After Irene and Gene moved to Schuyler in 2000 there wasn’t a sunny day that passed by that she wasn’t planting flowers or making sure the lawn was mowed. She is survived by her husband of almost 60 years Gene of Schuyler, daughter Lori (Bernard) Bunn of Scribner, and son Michael (Sherri) Sobota of Schuyler; grandchildren Lacey (Joe) Sateren and their children Bentley and Hadlee; April Bunn; Cassandra Sobota (Zach Nelson) and their children Chloe, Taygn, and Noah; Breanna (Juan) Rodriguez and their daughter Sophia; Brandon (Maday) Sobota and their children Joshua, James, Justin, Jason; and Christian Sobota; and brother-in-law Gerald (Rita) Brabec. Irene is preceded in death by her parents; parents-in-law Joseph J. and Julia Sobota, and sister-in-law Sharon Brabec.

Irene Sobota, 81, of Schuyler passed away on April 12, 2021 at the St. Joseph&#8217;s Villa in David City. Memorials can be directed towards Family Wishes for later designation. Mass of Christian Burial for Irene will be held on Thursday,... View Obituary & Service Information

The family of Irene Sobota created this Life Tributes page to make it easy to share your memories.

Send flowers to the Sobota family.