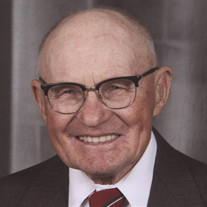 Funeral Mass for James V. Sindelar, age 91 of Howells, will be held at 10:30 AM on Thursday, September 17, 2015 at St. John’s Catholic Church in Howells. Visitation will be held on Wednesday from 4 PM to 8 PM at the church and one hour prior to the funeral on Thursday. A parish rosary will be recited at 7 PM on Wednesday. Burial will be in the St. Mary’s Catholic Cemetery at Tabor, rural Howells. James Victor was born October 14, 1923 in the Tabor community to James A. and Bessie (Svitak) Sindelar. He was raised on the family farm and continued to farm that land with his son and never fully retired until December of 2013 when he moved to Parkview Nursing Home in Dodge. Jim died at Parkview on Sunday, September 13, 2015. His early education was in a country school and in 1942 he graduated from Howells High School. On September 22, 1948 he married Agnes Kudera at Holy Trinity Catholic Church Heun. James was a member of St. Mary’s Catholic Church Tabor until it closed in 2005 and he then became a member of St. John’s Catholic Church in Howells. He was proud to be a 3rd generation farmer and loved driving the tractors and especially the combine during the harvest. He was an exceptional machinist and an avid welder who made many items for the farm. He raised livestock and was a self- taught taxidermist. James is survived by his son James F. (Linda) Sindelar of Howells and Diane M Leick (her special friend, Marty Jareske) of Duncan, NE.: five grandchildren, Amanda Sindelar of Omaha, Stephanie Sindelar of Norfolk, Greg Leick, Nick (Amy) Leick all of Columbus and Jennie (Nick) Horvath of Lincoln; four great grandchildren, Jadyn, Luke, Mitchel and Parker Horvath; four step-great grandchildren, Michael, Josh, Andrew and Alex Murry; two sisters. Evelyn Nadrchal of Clarkson and Emily (Edward) Wortman of Lincoln. He was preceded in death by his wife, Agnes (9/18/1993); granddaughter, Jamie Sindelar (1/16/2014); brother-in-law, Norman Nadrchal. Memorial suggested to Tabor Cemetery Fund, Jamie Sindelar Scholarship Fund or Family Wishes. Svoboda Funeral Home in charge of arrangements. www.svobodafuneralhome.net

Funeral Mass for James V. Sindelar, age 91 of Howells, will be held at 10:30 AM on Thursday, September 17, 2015 at St. John&#8217;s Catholic Church in Howells. Visitation will be held on Wednesday from 4 PM to 8 PM at the church and one hour... View Obituary & Service Information

The family of James V. Sindelar created this Life Tributes page to make it easy to share your memories.

Funeral Mass for James V. Sindelar, age 91 of Howells, will be...

Send flowers to the Sindelar family.