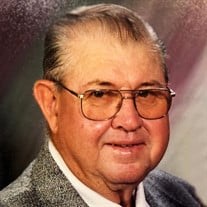 John “Jack” Konsel, 87, formerly of Howells passed away Tuesday, April 10, 2018 at his home in Elkhorn. Memorials can be directed towards Family Wishes. John “Jack” Konsel was born August 9, 1930 in Howells to John and Vlasta (Dlouhy) Konsel. He grew up on a farm north of Howells. He attended District 51 School in Cuming County and went on to graduate from Howells High School. He then purchased and operated the Mobile Station in Howells. On August 12, 1952 at S.S. Peter and Paul Catholic Church in Howells Jack married Jeanette Knust, five children were born to this marriage. The couple made their home in Howells until 1958 and then moved south of town and operated a commercial feedlot which he later purchased and named Grove Hill Cattle Company. In 1990 Jack and Jeanette moved to Howells for semi-retirement and he then worked for Cedar Hill Cattle feeding cattle for the next several years. Jack was a farmer and cattleman his entire life, and enjoyed the outdoors, his dogs, and horses. His interests were fishing, sports, NASCAR, vacationing with friends, and in his later years he enjoyed painting, reading, playing on the computer, and dice games. He is survived by his wife of 65 years Jeanette of Elkhorn; his children: Jack (Marlene) Konsel of Columbus, Jane(Chris) Hake of Kansas City, Juli (Dave) Fiala of Howells, and daughter-in-law LaDonna of Omaha. Eight grandchildren: Melissa(Sam) Stutzman, Bethany(Pat) Morrison, Sarah(Zac) Buckmiller, Amanda Hake, Brett and Ryan Konsel, and Clint Fiala. Seven great-grandchildren: Claire, Erica, Carlie, and William Stutzman, Zoe and Abigail Buckmiller, and Olivia Morrison. Jack is preceeded in death by his parents, infant son Joseph Konsel; son Bill Konsel, grandson Michael Konsel, brother Allyn Konsel, and sister Darlene Pieper.

The family of John "Jack" Konsel created this Life Tributes page to make it easy to share your memories.