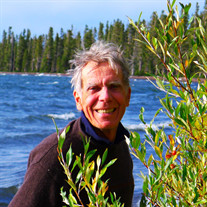 John “Jack” Pokorny, 80, died Saturday, July 29, 2017 in Dodge, NE. where he had been recovering from a fall earlier in June. Previously he had been living in Schuyler, NE. at Golden Living. Memorials to the family’s choice. Jack was born in Schuyler, NE. on November 18, 1936. He graduated from Schuyler Central High School in 1954, and earned a B.S. in Political Science at the University of Nebraska in 1958. He later earned a teaching certificate at Humboldt State College in Arcata, Ca., and Master of Science in Liberal Studies at Reed College in Portland, OR. in 1971. He taught in Merced, CA., Cloverdale, CA., Corvalis, OR., and at the Nebraska Penitentiary in Lincoln. He was a writer at NETV, Lincoln, NE. and later worked for the family business, Pokorny Oil in Schuyler. In mid-life he started making willow baskets and became a full-time artist. He made hundreds of baskets over a 30-year period and sold them all over the country. He loved meeting and forming relationships with the many people who bought his baskets. He made his baskets out of river willow, wild plum, dogwood, and wove in various grasses. He collected all of his materials around the Platte River Valley, and loved the Pawnee Indian heritage around the Schuyler area. He was an Eagle Scout, and truly loved Nature. He reminisced about going to the Philmont Scout Ranch in N.M. when he was 9. He was a natural botanist and knew every tree, shrub, flower, bird and animal. He loved storms, and would often stand in the front yard during tornado warnings and severe thunderstorms. His heroes were Gary Snyder, Martin Luther King, Peter Matthiessen and Allen Ginsberg. He was a member of the Student Nonviolent Coordinating Committee (SNCC) advocating non-violence. He also was a member of Nebraskans for Peace. He is survived by his two daughters, Frances Pokorny, Schuyler, Ne. and Holly Pokorny Johnson, (Jeff) Eagle, ID. His grandchildren, Molly Johnson (Pullman, WA.) and Ben Johnson, and his siblings, Jeff Pokorny, Omaha, Ne., Judy Pokorny Hoppe, Lincoln, NE. and Jay Pokorny, Chadds Ford, PA., and Barbara Dudek Pokorny, Schuyler, NE., (married 1965-1996.) He loved all of his friends, and was the ultimate extrovert. He was always the last to leave a party, and never stopped talking. We will miss him dearly.

The family of John "Jack" Pokorny created this Life Tributes page to make it easy to share your memories.

Send flowers to the Pokorny family.