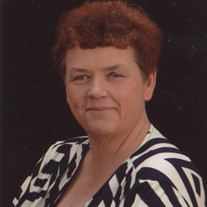 A Memorial Service for Katherine (Kathy) Vomacka (age 50 of Leigh) will be held at 2 PM on Thursday, October 30, 2014 at St. John’s Lutheran Church in Leigh. Kathy was born November 26, 1963 in Pender, NE to Patrick and Nadine (Schomaker) Thompson. She graduated from Schuyler High School in Schuyler, NE in 1982. On September 1, 1984 she and Stanley Vomacka were married in Leigh. Kathy loved to spend time with their grandkids and would do anything for them. She had a heart of gold and was an active volunteer in her community and church. She loved 80’s music, crafting, and keeping people informed about other folks needs in the community. She was apt to make a few off the wall comments just to get a reaction. Kathy died October 26, 2014 at their home in Leigh. Kathy is survived by her husband, Stanley of Leigh; three children, Cassandra (Andrew) Wicks of Lincoln, Josef Vomacka of Stanton and Chelsey (Riley) Greene of Clarkson; five grandchildren, Andrew, Ty, EmmaClair, Jackson and Stanley; her mother and step-father Nadine and Daniel VonSeggern of Lincoln; brothers, Scott (Sharon) Thompson of Blair and James (Mindy) Thompson of Sloan, IA; sisters, Laura Mackling of Emerson and Angela VonSeggern of Lincoln; step-mother, Sandy; step-siblings, Tara, Tim, Troy and Todd; nieces, nephews, aunts, uncles and cousins. She is preceded in death by her father, Patrick Thompson; grandfathers, Philo Thompson and Henry Schomaker; grandmother, Gladys Thompson; brothers-in-law Milo Vomacka and Eugene Mackling; uncle, Paul Schomaker; aunt, Kathryn Schomaker.

The family of Kathy Vomacka created this Life Tributes page to make it easy to share your memories.

A Memorial Service for Katherine (Kathy) Vomacka (age 50 of Leigh)...

Send flowers to the Vomacka family.