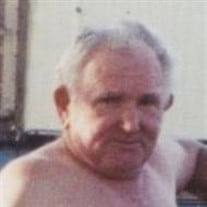 Larry Lee Roucka, age 76 of Rogers, died February 28, 2015 at his home. He was born October 25, 1938 on a fram in the Clarkson area to James and Marie (Koren) Roucka. Larry served in the Navy from November of 1955 to November of 1958. He worked form Divis Construction in Fremont for 35 years and at Appleton Electronics for 10 years. Larry was an avid fisherman and gardener and he loved working with wood. He was a gruff exterior of a man with a teddy bear insides. Larry is the beloved father of Ricky Roucka of Dale City, Virgina, Robin Kellogg of Rogers, Rawslin Roucka of Leon, Kansas; grandchildren, Micah, Reina, Luaren, Elijah, Caleb, Phillip, Lexi, Bryan, Colton, Chelsey and Cody; great grandchildren, Kayla, Zion, Samaya, Cameron, Kaden and Naomi; brothers, Lyle and Jesse Roucka; sisters, Karen Gay and Darlene Divis. Larry is preceded in death by his loved mother, Marie and father, James; brothers, Kenny, Duane and Keith Roucka. "We shall miss you, growly bear." Your loving family.

The family of Larry Lee Roucka created this Life Tributes page to make it easy to share your memories.

Send flowers to the Roucka family.