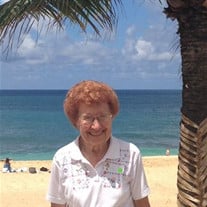 LaVaine Estelle Kelly (Radhaus) died peacefully in her loved home in Hillsboro, Oregon on October 11th, at the age of 96. Her home meant everything, and it was her intention to never have to leave it. LaVaine chose to not have any services or memorials as part of the many directions and communication she made clear to her family. Her goal was to make her passing as easy on surviving members as possible. She never stopped thinking about others. LaVaine asked to be cremated and her ashes to be placed next to her husband Jim in Schuyler, Nebraska. In lieu of flowers, the family requests, if you desire, to donate to your favorite charity or cause in LaVaine’s name. In addition, if you have any special memories of LaVaine, please share with the family. Your thoughts can be sent to [email protected] LaVaine was born in Schuyler, Nebraska on September 3rd, 1925, to Edward and Stella Radhaus. LaVaine was preceded in death by her beloved husband Jim, (also of Schuyler) on August 10th, 1999, after 54 years of marriage. LaVaine’s greatest love was her family and friends. She loved spending time with them, in person or from afar by phone. She could converse with anyone at great lengths…often frustrating her husband, Jim. He would ask, “what can you have to talk to someone that long about”. LaVaine constantly reminisced about the past with such fondness. Everyone was always captivated by her stories of growing up in Schuyler. LaVaine dearly loved her parents and missed them terribly after they passed. LaVaine’s dad, Edo as he was known by many, made an everlasting impression on her, and she would frequently talk about him with such love, respect, and endearment. LaVaine had an incredible relationship with her granddaughter, Jennifer Lynne Kelly. They were as close as any two people could ever be. A day never passed without Jennifer calling her grandma. Often there would be multiple calls during a day, never missing a chance to tell grandma what was going on in her life. They made two trips to Hawaii, once on a cruise around the islands in 2000. They went to Disneyland four times, and Disney World three times, once on a cruise. Life to both LaVaine and Jennifer were perfectly complete when they were together. When LaVaine began suffering from heart disease, Jennifer, who lives in Willis, Texas, moved in with her grandma in Hillsboro, Oregon, and proceeded to balance a life of remote work and caretaking for her grandma. Grandma meant the world to her, and Jennifer cared for her 24/7, thru her grandma’s health challenges for fourteen months. LaVaine lived a life focused on getting things done. A daily to do list was consistently written and followed. It would always include cleaning, shopping, cooking, besides the daily interruptions of conversing with her family on the phone or neighbors that would stop for a visit. This was the only disruption that would cause LaVaine to not complete a project. But she did not mind, as relationships were so important to her. Even when she would constantly describe herself as someone who liked to be alone she wanted both. She always gave of herself to anyone that needed time or help with anything. LaVaine married James P. Kelly on July 10th, 1945, in Schuyler, Nebraska. Life on the farm was not a simple one. She never complained of the things she did not have. LaVaine only focused on raising her family in the way she thought was best. A friend once told LaVaine that the Kelly’s were like the Cleavers on the show, Leave it to Beaver. LaVaine took the comment as a compliment and recalled it often, as she was proud to be compared to Mrs. Cleaver. LaVaine is survived by her sons Robert and his wife Patricia of California, Richard, and his wife Theresa of Washington. She also leaves her granddaughter Jennifer Kelly of Texas. Last Rites were given on Saturday, 7/10/2021 by Father Tony Galati from Holy Trinity, in Beaverton, Oregon. LaVaine loved going to mass at Holy Trinity when she was able to. It meant so much for her to hear Father Dave’s funny stories about his cat. Praying the rosary daily was a normal routine for LaVaine upon waking up for the day.

LaVaine Estelle Kelly (Radhaus) died peacefully in her loved home in Hillsboro, Oregon on October 11th, at the age of 96. Her home meant everything, and it was her intention to never have to leave it. LaVaine chose to not have any services... View Obituary & Service Information

The family of LaVaine Kelly created this Life Tributes page to make it easy to share your memories.

Send flowers to the Kelly family.