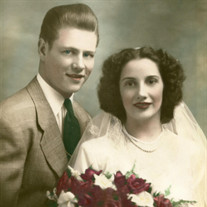 LaVaine Gaskill, 90, formerly of Schuyler passed away Saturday, December 15, at her son's home by Blair. Memorials can be directed to Family Wihses. LaVaine Joyce Gaskill, (nee Jedlicka) who was called Suzie by most, was born December 22, 1927 in Schuyler, is the only daughter of Anton A and Lucille M (Klimes) Jedlicka. LaVaine was born in Schuyler and received her education in a country school near her childhood farm, graduating from Schuyler High School in 1944. She did not attend kindergarten nor 8th grade, so started 9th grade/high school at age 13. She boarded in town with a family while attending high school because the 14-mile round trip drive back and forth to her home was considered too far to drive daily. She graduated high school at age 16. She attended business school in Omaha during World War II. She met our father, Larry Gaskill, during high school. After graduating high school, she attended business school, marrying Larry at age 19 at Saint Cecelia’s Cathedral in Omaha on May 31, 1947. Our dad, Larry, was the first person to call mom “Suzie”, after the black eyed Susan flower that mom’s beautifully large, black eyes reminded him of. Larry and Suzie made their home in Omaha and Sioux City Iowa until they moved back to Schuyler in 1997. Suzie worked at the Telephone Company, then as an Avon Lady and as the Supervisor for the kitchen at Fontenelle Elementary School. She retired in 1989 at age 62. Suzie loved spending time with her family most of all—but also loved making kolaches, gardening, making jams and jellies and canning, playing cards with friends, mushroom hunting, and bird watching. She and Larry assisted her parents on their farm whenever they could over the years. She loved living near Lost Creek in Schuyler and was a devout Catholic, attending events at St. Mary’s, St. Augustine’s and the Senior Center in Schuyler. After Larry died in 2004, Suzie lived alone on the ranch for 7 years. During that time she travelled to Omaha often, to be with Susan and Dan’s children, her grandchildren and they in turn had many family gatherings at “the ranch” in Schuyler. Suzie also visited Boulder, Colorado often, to see Teresa and her daughter, Chrissy, who loved to stay on “the ranch” with her grandparents for a week every summer. LaVaine is survived by a son Dan (Geri) of Blair, 2 daughters Susan (Tom) Fetters of Schuyler and Teresa Marshall of Boulder Colorado, 9 grandchildren, 9 great grandchildren, a brother in law, Alton, of Moses Lake, Washington, and a sister in law, Marcia, of Godfrey, Illinois. LaVaine is preceded in death by her husband, Larry Gaskill.

LaVaine Gaskill, 90, formerly of Schuyler passed away Saturday, December 15, at her son's home by Blair. Memorials can be directed to Family Wihses. LaVaine Joyce Gaskill, (nee Jedlicka) who was called Suzie by most, was born December 22,... View Obituary & Service Information

The family of LaVaine "Suzie" J Gaskill created this Life Tributes page to make it easy to share your memories.

Send flowers to the Gaskill family.