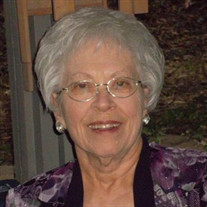 Lenore Sellhorst, 90, of Howells, passed away on Wednesday, December 18, 2019 at St. Francis Memorial Hospital in West Point. Memorials can be directed towards the Howells Community Fund, Howells Community Catholic School, or the Howells Library. Lenore was born February 17, 1929 in Colfax County south of Howells to Jerry and Mary (Wisnieski) Coufal. She graduated from SS Peter & Paul Catholic School in 1942, and Howells High School in 1946. She taught in rural schools 3 years after high school. Lenore was united in marriage to Francis Sellhorst on May 2, 1950. Lenore was a teacher's aide at Howells Public school for 21 years. She was a member of SS Peter & Paul Christian Mothers, Woman's Club, Jolly 14 Extension Club, and Birthday Club. She enjoyed playing cards with friends and family, bowling, dancing with Francis, and working crossword puzzles. She loved listening to music of all kinds, reading, and spending time with her family. She is survived by her children Judy Wieser of Lincoln, Jean (Dick) Barta of Urbandale, Iowa, Jan (John) Lamer of Lincoln, Ne and Jim Sellhorst of Santa Ysabel, California, 7 grandchildren and 6 great grandchildren. She was preceded in death by her parents, and her husband Francis in October, 2000, sister-in-law Rose Pribnow and brother-in-law Elmer Pribnow.

The family of Lenore M. Sellhorst created this Life Tributes page to make it easy to share your memories.

Lenore Sellhorst, 90, of Howells, passed away on Wednesday, December...