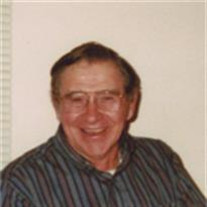 Leonard was born December 23, 1923 in Prague to Charles L. and Anna (Svoboda) Palensky. He attended District 73 in Rescue through the eight grade and received his GED at the age of 64. Leonard married Goldiemae Manzel on February 5, 1945 at St. Peter and Paul Catholic Church in Abie and they farmed in Saunders County. He served in the Army from January 26, 1946 to December 17, 1946. Leonard moved to David City in 2007 and was a member of the American Legion and Assumption Catholic Church. He was a member of the Heritage Club, enjoyed traveling, gardening, growing flowers, playing his drums and his accordion, wandering around Menard's, but most of all he loved spending time with his grandchildren and great grandchildren. Leonard died March 8, 2012 in a house fire in David City at the age of 88. Leonard is survived by his children, Connie (Duane) Svoboda of David City, Leonard, Jr. "Tom" (Loretta ) Palensky of David City, Julie Chmelka of David City, Ron (Tracy) Palensky of Linwood, Tim (Lisa) Palensky of Columbus, Tammy Ehrich of Fremont, Carmen (Kevin) Browman of David City and Pete (ReNee) Palensky of Schuyler; son-in-law, Jerome Jakub of Columbus; 31 grandchildren; 27 great grandchildren; brother, Charles "Chuck" (Sue) Palensky of Omaha; sister, Geraldine Vanek of Omaha; sister-in-law, Irene Palensky of David City. He is preceded in death by his wife, Goldie (9/22/2010); daughter, Judy Jakub (10/10/2010); granddaughter, Renee Palensky (6/18/2007); grandson, Anthony Palensky (3/8/2012). Funeral lunch will be served at the Knights of Columbus Hall in David City following the committal service at Assumption Catholic Cemetery at Appleton. To leave a message for the family - at the top of this page click "Send Condolences" / fill in YOUR name and e-mail address / type in your message / click PRIVATE (type in code) or PUBLIC / click "Add Memorial entry".

Leonard was born December 23, 1923 in Prague to Charles L. and Anna (Svoboda) Palensky. He attended District 73 in Rescue through the eight grade and received his GED at the age of 64. Leonard married Goldiemae Manzel on February 5, 1945 at... View Obituary & Service Information

The family of Leonard Palensky, Sr. created this Life Tributes page to make it easy to share your memories.