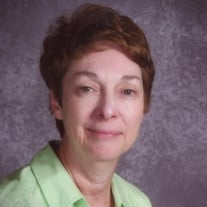 Linda Kay (Harrifeld) Hagewood, 69, of Schuyler, passed away Monday, March 19, at the University of Nebraska Medical Center in Omaha, surrounded by family. Memorials can be directed towards Trinity Lutheran Church or Schuyler Public Library. Linda was born Oct. 28, 1948, in Hastings, the youngest child of George and Berniece Harrifeld. She grew up on her family’s farm south of Blue Hill. An excellent student, Linda graduated from Blue Hill High School in 1967 and Kearney State College in 1971, earning a bachelor’s degree in elementary education. She began her career teaching second grade in Sandy Creek Public Schools. While there, she met another young teacher, Thomas Hagewood III. The two quickly hit it off and were married on July 16, 1977, in Blue Hill. They loved each other immensely and enjoyed 43 wonderful years together. Linda and Tom moved to Schuyler in 1978, where Linda taught first grade and Tom taught high school science and coached golf. The couple has two sons: Scott was born Oct. 8, 1980; Sean was born Jan. 13, 1984. They both graduated from Schuyler Central High School and the University of Nebraska-Lincoln. Scott is a software engineer for Raytheon in Omaha. Sean is the news coordinator for the University of Nebraska-Lincoln. Linda took great pride in her sons and loved them very much. Linda and Tom retired in 2015 after a combined 87 years of teaching, 74 of which were in Schuyler. They stayed in the community after retirement. Besides being a passionate educator, Linda was an active member of Trinity Lutheran Church in Schuyler. She was born and raised in the Lutheran Church-Missouri Synod and found great comfort and strength in her faith. She taught Vacation Bible School for many years. Linda cherished time spent with family and friends above all else. She particularly enjoyed the trips she took with her mother and sisters, and visiting her children. She also loved trying new restaurants with her group of retired Schuyler educators. Linda was a terrific cook, known for her meatballs, Watergate salad, popcorn bars and many other dishes that went quickly at family gatherings. She prepared food for many soup suppers, potlucks and other events. Linda and Tom enjoyed dining at restaurants, going to movies and concerts, and attending church together. Linda’s hobbies also included gardening, sewing, reading, talking to loved ones on the phone, and looking up new recipes and craft projects in magazines and online. She loved all sorts of animals, but particularly cats. Her kindness, generosity, strength and wisdom will be greatly missed. In addition to her husband and sons, she is survived by her sister, Phyllis (Ron) Garner, Ashland; nieces, nephews and cousins. She was preceded in death by her parents; and sister, Marilyn Rademacher.

The family of Linda Hagewood created this Life Tributes page to make it easy to share your memories.

Send flowers to the Hagewood family.