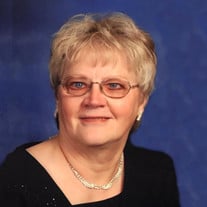 Linda A. (Karel) Sucha, 73, of Schuyler, passed away on April 7, 2021, at CHI Immanuel Hospital in Omaha. Memorials can be directed towards: Pier Center for Autism, St. Jude’s Children Hospital, or Schuyler Cemetery. Mass of Christian Burial will be held on Monday, April 12, at 10:30 a.m. at St. Mary’s Catholic Church in Schuyler with Fr. Gerald Leise officiating. Visitation will be held Sunday from 4 until 7 p.m. at the church with a parish rosary recited at 7 p.m. An additional viewing will be held Monday from 9:30 until 10:30 a.m. at the church. Masks are required for the visitation and Mass. Interment will be in the Schuyler Cemetery with lunch following at St. Mary’s Social Center. Svoboda Funeral Home is handling arrangements for the family. Mass will be live streamed to the Svoboda Funeral Home Facebook page: www.facebook.com/SvobodaFH/ Linda was born on September 26, 1947, in Columbus, Nebraska to Jerry J. Jr. and Wilma (Hledik) Karel. She was raised on a farm south of Clarkson and graduated from Clarkson High School in 1965. She was united in marriage to Alan L. Sucha on August 1, 1968, at S.S. Cyril and Methodius Catholic Church in Clarkson. For many years Linda worked at home as an exceptional farm wife and as a stay-at-home mother raising five beautiful children. She worked hard cooking, canning, and spending time in her sanctuary, her garden. She had a green thumb and her house was adorned with plants and flower pots everywhere. She loved decorating cakes for family and friends’ special occasions. Linda enjoyed watching her 12 grandchildren grow and spending time with them sharing her many talents of baking horn rolls, kolaches, making noodles, and baking cupcakes and cookies. She spent a lot of time sewing, cross-stitching, and doing word searches. In 1986, she and Alan moved into Schuyler where she worked various jobs at Schuyler Memorial Hospital, Don’s Bakery, Cunningham Drug Store, and most recently McClure’s Flowers Plus, where she loved delivering flowers and making peoples day with her beautiful smile. She was a member of St. Mary’s Catholic Church Guild and Krafty Kitchenettes Extension Club. Linda was an officer of the Colfax County Family, Community, Education Council and of the Eagles Auxiliary as well as a member of the VFW Ladies Auxiliary. She also found time to volunteer at church and help to teach CCD classes. Linda is survived by her husband of 52 years Alan L; sons: Alan Jay of Schuyler, Brian (Dawn) of Columbus, Chad (Irene) of Columbus, daughters Deanna (Barry) Herout of Omaha, and Katrina (Chris) Reha of Pender; 12 grandchildren; and her beloved foreign exchange student Kristin (Jarausch) Schmidt; sisters: Janet (Ed) Wellman, Sherry (John) Rusin, Donna (Alvin) Gall, Mary (Dean) Horkey, Diane (Ron) Prokopec, Sue (Dean) Pekny, brother Kenny (Deb) Karel and many nieces and nephews. She is preceded in death by her parents, parents-in-law Harold and LaVonne Sucha, son Scott Sucha, and brother-in-law Dana Sucha.

Linda A. (Karel) Sucha, 73, of Schuyler, passed away on April 7, 2021, at CHI Immanuel Hospital in Omaha. Memorials can be directed towards: Pier Center for Autism, St. Jude&#8217;s Children Hospital, or Schuyler Cemetery. Mass of Christian... View Obituary & Service Information

The family of Linda A. Sucha created this Life Tributes page to make it easy to share your memories.